"Take a good look, you knocked a Black man's teeth out."
KGO
By Dan Noyes and Cornell Barnard 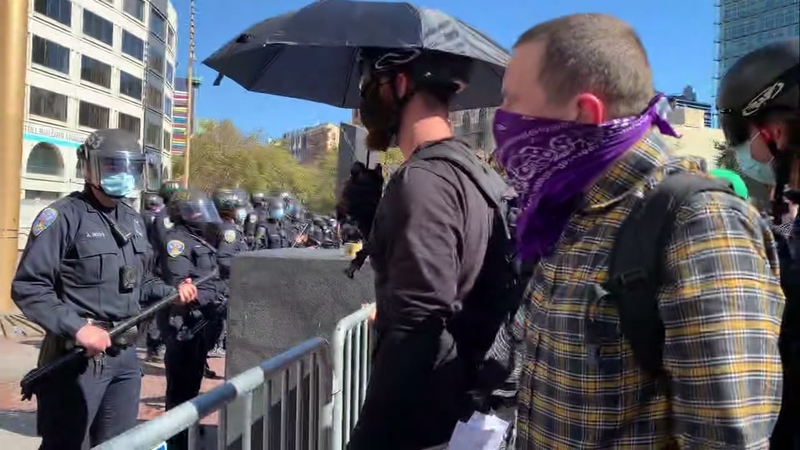 SAN FRANCISCO (KGO) -- An event billed as a free speech rally and a protest against Twitter turned violent Saturday. The event featured some well-known conservative personalities, but organizers were forced to cancel the rally minutes after it started.

A large crowd of demonstrators gathered at UN Plaza in San Francisco to oppose a small group, holding what was billed as a free speech rally protesting what they say is Twitter's censorship of some of its content.

"They have no business being here, they're trying to build a fascist movement in this country," said San Francisco resident Carol Seligman.

Philip Anderson says his “free speech rally” is canceled, he claims he was attacked before the event. Speakers were shouted down by a large group of counter-protesters. https://t.co/O49E8GRH2x pic.twitter.com/hcuQgZ2e02

An event billed as a free speech rally and a protest against Twitter turned violent Saturday and organizers were forced to cancel the rally minutes after it started. ABC7 News' Dan Noyes was on the ground at the rally and captured footage of the event.

The rally was granted a permit from the city.

Some of the speakers expected included well-known President Trump supporters and conservative right personalities, but most never got the chance to be heard.

Police wearing riot gear tried to protect the speakers from the crowd. But many threw bottles at the stage and shouted down the speakers.

Before the event, the main organizer, Philip Anderson said he was attacked and punched getting his front teeth knocked out.

Anderson posted photos to social media of his bloody mouth with a front tooth missing and another hanging loosely. He said anti-fascist protesters attacked him "for no reason."

"Take a good look, you knocked a black man's teeth out," said Anderson.

Minutes later, Anderson announced the rally was over.

"Too bad it got canceled, that's what happens when you lose free speech, this is what our country has turned into," Anderson told the crowd.

ABC7's Dan Noyes was also on the ground at the rally and observed an activist with Team Save America being taken away in an ambulance and an injured San Francisco police officer on the ground by San Francisco's United Nations Plaza.

RELATED: 'If there's no justice, how can we have peace?' 'Go-slow' caravan ties up Bay Area bridge traffic

Noyes witnessed attendees of the rally heading down Market Street, even after the rally was canceled.