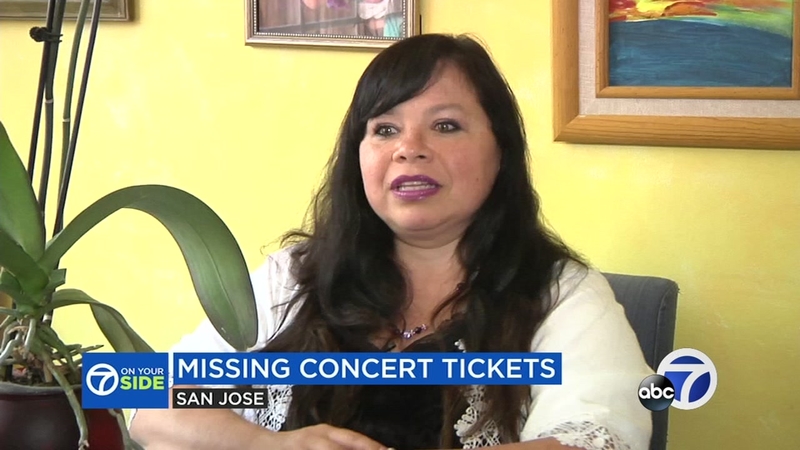 SAN JOSE, Calif. (KGO) -- When Margarita De Los Rios of San Jose heard Paul McCartney was on tour, she wasted no time. "I love Paul McCartney, I love the Beatles," she said.

De Los Rios went online and bought two tickets to the concert in Phoenix - she and her son would make a vacation out of it. "I wanted my son to experience seeing a legend in a live concert. I thought it was going to be a wonderful road trip with him," De Los Rios said.

Her son Diego is only 17 and not too familiar with this Paul McCartney fellow, but he was game to go. "I don't really listen to Paul McCartney but I know he's really good," Diego said. He even learned a couple of those oldies.

"All you need is love,'' mom and son sang together.

"I thought this would be a good opportunity to get into the classics and be with my mom,'' Diego said.

There was just one problem. The concert tickets Margarita bought never arrived -- and the concert is next week. "The time is getting short, I need my tickets," De Los Rios said.

"I'm going to have to tell my son we don't have tickets," she said.

Margarita had purchased the tickets on StubHub last September. StubHub did send her a package in October, with a letter saying, "you got these tickets... Make sure everything is correct.''

"But when I looked in the envelope, there was no tickets!" De Los Rios said.

At first she thought they'd arrive separately. They never did. So she called StubHub. "These tickets have not materialized, where are the tickets?" she asked.

StubHub explained that it's a marketplace for buying and selling tickets, and it couldn't reach the seller.

"So they said, well we can't do anything for you if the seller is not answering the phone," recounted De Los Rios. "I felt taken for a fool really."

De Los Rios was out $422. More importantly, the concert trip was off.

"That's a lot of money to lose," she said. "I was already facing not going to the concert and having that lifetime experience. I thought time is running out, I'm not gonna have the tickets."

She contacted 7 on Your Side. We asked StubHub about its promise that all tickets are 100% guaranteed. The company took action, giving De Los Rios a $500 credit, which she used to buy tickets to the Paul McCartney concert right here in San Jose.

"Triumph! I was so excited I jumped up!" she said.

De Los Rios printed her own tickets this time. "I absolutely am incredibly thankful to 7 on Your Side," she said, breaking into a version of the Beatles classic: "All you need is tickets... doo doo doo doo doo!" she sang.

StubHub says it's not clear what happened to those original tickets, but they were a part of a set -- and the seller could not re-issue De Los Rios's tickets without invalidating the rest of them. StubHub said it was a rare glitch, and it promises to live up to their guarantee.