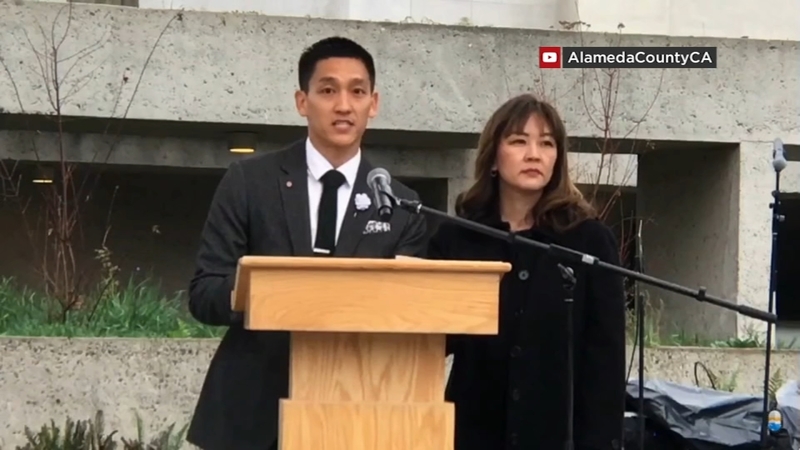 ALAMEDA, Calif. (KGO) -- A community celebration was held in honor of Alameda Supervisor Wilma Chan Wednesday. Chan was hit and killed by a driver while walking her dog last month.

Family members and colleagues shared personal stories and memories of Chan. Her children described their love and admiration for their mom.

"Our mom once said her legacy was to make life a little better for people less fortunate. That's what a meaningful life is. One lives not just for oneself but for one's community. It is clear more than ever that she certainly fulfilled her legacy," said her son Daren Chan.

On November 3, Alameda Police say a driver hit and killed Chan at the intersection of Shoreline Drive at Grand Street while she was walking her dog.

The Bay Area remembers the life and work of Alameda County Supervisor Wilma Chan, tragically struck and killed in Alameda while walking her dog.

Her colleagues said she brought a unique skillset to the Board of Supervisors.

"Wilma Brought a certain skillset to the board of supervisors you could rely on Wilma," said Alameda Board of Supervisors Vice President Nate Miley.

"She was not bashful, she was relentless, she was courageous, she had integrity," Miley continued.

Aside from her notable 30 years of public service at both the Alameda Board of Supervisors and California State Assembly, those who knew her best shared her love for other passions, including fashion and ice cream.

RELATED: Intersection where Supervisor Chan was killed identified as a high-injury intersection by Alameda

It was perhaps destiny that Chan would have the impact she did.

Her daughter explained how her mom got her name.

"My mom was the second daughter born to my grandparents and at that time my great grandfather really wanted to have a grandson, but alas my mother was born and they gave her the Chinese name meaning change," Jen Chan said.

"Because my great grandfather wanted my mom to be a boy. Knowing this my mom often shared that instead of changing who she was, that she would change the world and she did just that," said Jen Chan.

That change starting right here in the Bay Area.