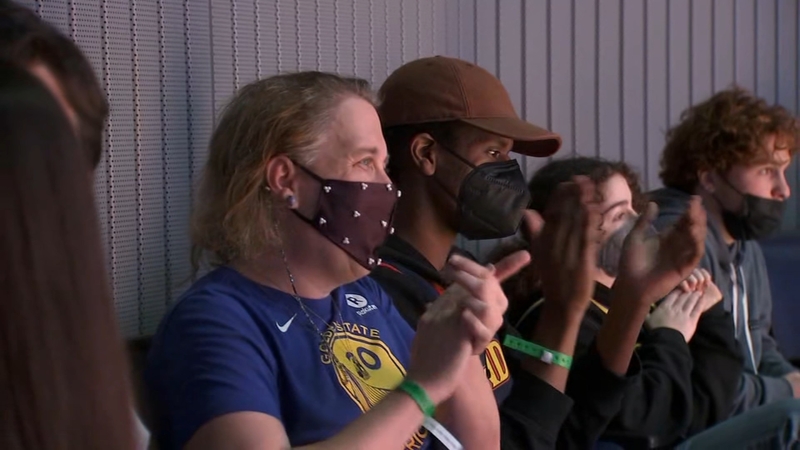 SAN FRANCISCO (KGO) -- Cheers erupted at Chase Center Sunday not only for Klay Thompson's return after more than 2 years but also for a special guest, Amy Schneider, who happens to be a Warriors fan.

ABC7 News sports anchor Chris Alvarez caught up with the "Jeopardy!" super champ and Oakland resident Sunday night. She was invited to her first game at the team's new digs in San Francisco.

"It is unbelievable I hadn't made it to the Chase Center yet with the pandemic and I've been wanting to, coming on this day has just been amazing!" she beamed.

Clad in her Curry jersey, Schneider is the first woman to break $1 million in prize money with her 28-day winning streak on the show. She says she was a Warriors fan, before the team was any good.

"He's the reason I got into the warriors in the first place, I got out to the Bay Area in 2009 I didn't have an NBA team."

While Schneider couldn't elaborate if she passes James Holzauer for third all-time consecutive wins... she admitted it was a goal.

She's just proud of how, as a transgender woman, the Jeopardy platform has helped changed public perceptions.

"It's incredible. I'm not just hearing from other trans people but from parents and grandparents of trans people. For me to go out and do something so normal as 'Jeopardy!,' I think it really changes a lot of people's minds."

Schneider left us with this bit of advice:

"Keep being yourself, don't let one part of you limit the other part of you, you can be everything at once. You don't have to pick and choose."