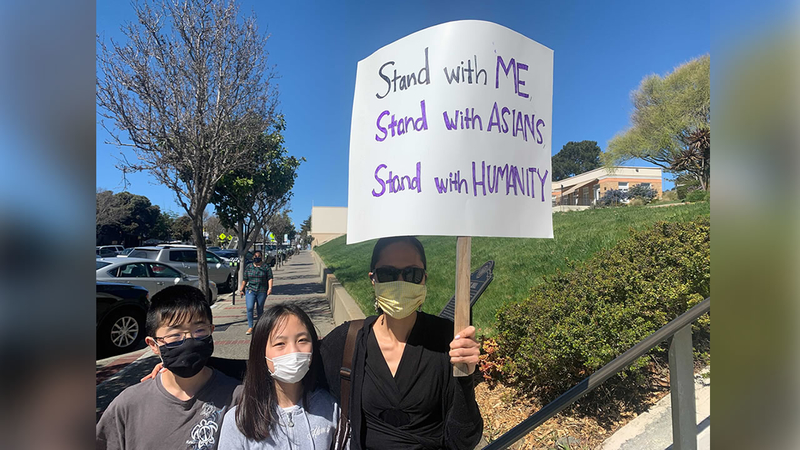 Supporters gather for 'Rise Up with Asians Rally' event in SF

SAN FRANCISCO (KGO) -- There was a big show of solidarity on the Peninsula Friday as city and county leaders stepped up calling for an end to hate and violence against the Asian American community.

Nicolas says she won't be silent anymore about racism and violence against the AAPI community.

"I don't want my grandchildren to be scared because they're Asian. Let's stand up and talk about this," Nicolas added.

She joined with elected colleagues from across San Mateo County to denounce the horrific violence, caught on camera, often targeting Asian American seniors.

"Enough is enough. We will no longer be the silent minority," said Hillsborough City Councilmember Marie Chuang.

VIDEO: 'What the hell is wrong with us?' Newsom condemns anti-Asian racism in San Francisco
EMBED More News Videos

"My parents told me it was important to stand up for myself," said Clayton Lau.

Lau came to the rally with his sister and mother, Julia, who held a sign calling for unity. She says anti-Asian racism is nothing new.

"I grew up in the 1980s, back when Japan-bashing hit a climax like it is today. I don't want my kids to go through this in another 40 years," said Julia Okuda.

The Stop APPI Hate Coalition says there have been nearly 4,000 anti-Asian incidents since the pandemic began, about 45% of them in California. South City police say those numbers are likely higher.

"There's a lot of people in the Asian community who don't want to come forward but we're encouraging them to come forward, can help you," said Sergeant Fahmida Murphy from the South San Francisco Police Department.

Police tell those who are fearful to be aware of their surroundings when In public. For this group, raising awareness is the first step. Silent no more.