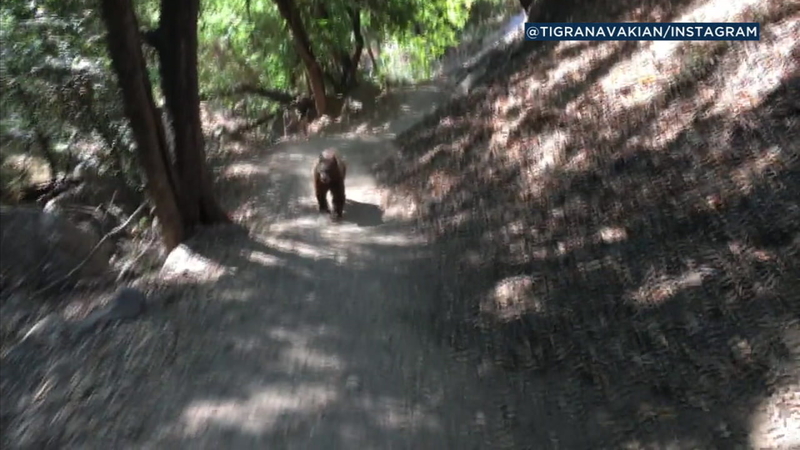 MONROVIA, Calif. -- It was supposed to be a peaceful family hike for Tigran Avakian and his extended family -- but it quickly turned terrifying when a black bear charged at him and his wife Sunday.

It happened while on the Monrovia Falls Trail. Avakian, a wildlife photographer, spotted the bear while hiking with his wife Zarina, his 4-year-old daughter, his father and an uncle.

VIDEO: Bear trapped in dumpster gets help from kind stranger

The group kept moving, but Avakian and his wife stayed behind to get some video of the bear. That is when Tigran said it charged directly at him.

"It was going full speed at me," he said, "All the way until 5, 6 feet away from me, at which point it made a sharp turn left and went up the slope. And that's when I started to breathe again."

Tigran captured the charge with his smartphone. He and his wife slowly backed away from the bear, went around a bend and ran to catch up with the rest of their group, but realized the bear had followed them and now had them cornered at a dead end.

"The little one (their daughter) is there and maybe the bear can attack her," Zarina said. "This is the part when I was really panicking...I was shaking!"

Tigran said he remembered learning that bears don't like noise, so the group began screaming and waving their arms. It convinced the bear to move far enough off the trail for the group to sneak by.

"We ever so cautiously walked around it and off we went -- straight to the car," he said.