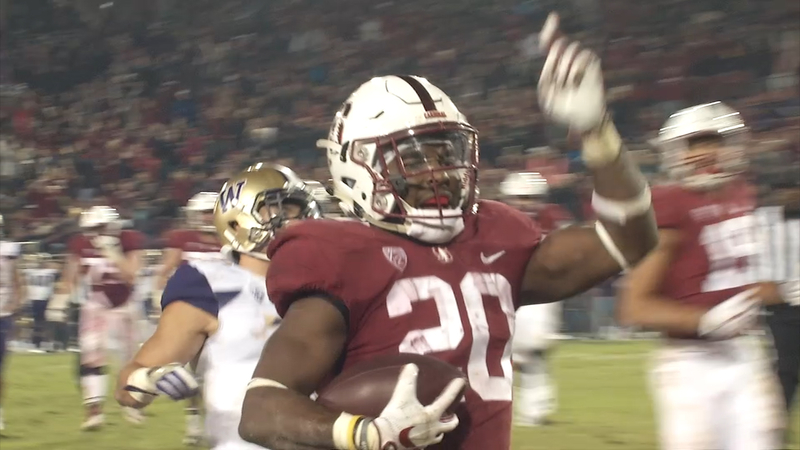 STANFORD, Calif. (KGO) -- "Dear NFL GMs, My name is Bryce Love, and I'm the best running back in this draft."

That was the opening statement in a letter written for the Players' Tribune by Stanford Running Back Bryce Love ahead of the 2019 NFL Draft.

If it had not been for a torn ACL in the final regular season game for Love, everyone may be on board with this statement.

But the knee injury is a concern that some teams have and it has hurt his draft stock.

With that said, if you watched any Stanford football while Love was on the Farm, you know the truth.

"I feel like I bring a certain kind of attitude with my style of play and all that good stuff," Love said. "I'm just kind of carrying that to the next level."

But before he set is sights on the big leagues, Bryce Love came to Stanford by way of Wake Forest, N.C. where he was a star on the football and the track.

Nicknamed "Baby Bolt", Love set the U.S. records for 11-year-olds in the 100- and 400-meters while also winning the 200-meters at the U.S. Track and Field Junior Olympics.

On the football field, his four-star recruit status came as a result of more than 5,300 yards and 71 touchdowns.

Off the track and field, Love was a member of the National Honors Society and a finalist for the Watkins award honoring the nation's top African-American high school athlete.
An award his Stanford #20 counterpart, Bobby Okereke, won the year prior.

Then Love came to Stanford where he paired with Heisman Trophy Finalist Christian McCaffrey for one of the greatest duos to ever line-up in the same backfield for Stanford.

He did what he could in his back-up role as McCaffrey set countless records, including the NCAA all-purpose yard mark, but Love's true success would come when the spotlight was only on him in 2017.

Love's junior season will go down in Cardinal history.

"It's what I've dreamed of since I was a little kid." - @Blovee_20 is ready for this week's #NFLDraft.#StanfordNFL pic.twitter.com/gsLtjPRIe4

The single-season rushing yard mark tops all running backs to ever try and do it in Palo Alto, Calif.

That's not where the records stopped though for Love.
12 100-yard rush games set a Stanford all-time mark.

And while he and McCaffrey made one of the best duos to ever play at Stanford, Love and his backfield mate Cameron Scarlett combined for the single-season Stanford record as the top rushing tandem with 2,507 yards between the two.

Love won the 2017 Doak Walker and Lombardi awards and was named a unanimous All-American and PAC-12 Offensive Player of the Year.

The highlight of the awards season came when he stood next to Baker Mayfield and Lamar Jackson as one of three finalists for the Heisman Trophy Award.

Still, NFL evaluators believe Love was only a change of pace back in the big leagues.

Love said he came back to Stanford for his final season to complete his promises to himself, his family, his teammates and his school.

He graduated with a degree in Human Biology and lived up to a promise that he made when he signed his letter of intent by finishing what he started.

But he also made a promise to become the most complete back he could be.

Love worked on his pass protection and his ability to catch the football out of the backfield.

Now the next time we'll hear Bryce Love's name will be at the 2019 NFL Draft in Nashville, Tenn.

The injury will more than likely keep him out of the first round, but he is still expected to be a high selection sometime on Day 2.

He posted an Instagram video showing him running at top speed and doing agility drills on Apr. 19, 2019 to show that the progress on his recovery is going well.

Bryce Love has the chance to continue his success on the football field, this time in the NFL.

Many see Love as someone who is just as great of a person as an athlete.

The hometown fans are all cheering for him and his Stanford teammates to succeed.

"Obviously with the type of guys that we have out here, we're going to go out there, grind and compete," Love said.