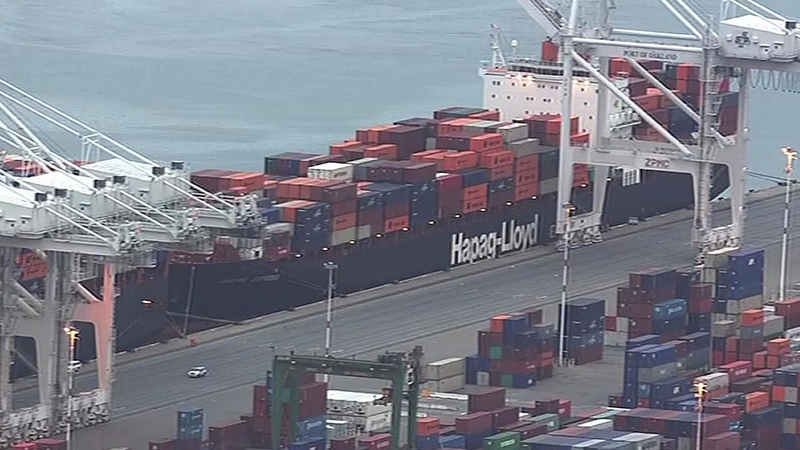 SAN FRANCISCO (KGO) -- Every time a large ship sails in or out of the San Francisco Bay, a bar pilot is at the controls. Those pilots made an average of $450,000 each last year and now, they're asking state legislators for a raise that would up their pay to a half million dollars.

The bar pilots say they haven't had a rate hike in 10 years and the cost of doing business has gone up a bit since then. However, the companies who pay those pilots say they are already the highest paid on the West Coast.

The labor disputes at the Port of Oakland earlier this year cut into revenue for nearly everyone involved, including the bar pilots.

He says the brief Oakland Port shutdown is one of the reasons why they're asking for a rate hike, but the companies that pay those rates say the bar pilots are already the highest paid on the West Coast for working two weeks out of each month.

"They've got a good job. Each one of those moves is important. We are willing to pay them a lot of money to do it well. But that doesn't mean you get to just get a $50,000 bump in pay just because you want one," Mike Jacob, from the Pacific Merchant Shipping Association, said.

According to figures from the Pacific Merchant Shipping Association, the average pay per pilot in the San Francisco Bay last year was $453,766 a year. That's more than pilots elsewhere along the Pacific Coast. In Seattle the average is $346,733, in Los Angeles they have an average of $326,856 and in Long Beach it is $265,000.

The Pacific Merchant Shipping Association says the San Francisco Bar Pilots have got nearly every rate hike they've asked for since 2006.

But in 2007, when the Cosco Busan slammed into the Bay Bridge, the bar pilots came under close scrutiny. According to the shipping association, they expect the pilots to make more money with the existing rates.

A rate hike has to be approved by the state legislature. A vote is expected early next week.
Related topics:
businesssacramentocaliforniasan franciscoport of oaklandseattleembarcaderomoneysan francisco baycalifornia legislationstrikeport of los angelesport of long beach
Copyright © 2021 KGO-TV. All Rights Reserved.
TOP STORIES
California Dreaming: The Future of the Golden State | Part 3
SF tenants get 6-figure buyout to leave luxe unit
Health officials respond to self-prescribed COVID booster shots
Coronavirus updates: SF in midst of 4th surge due to Delta variant
Disney joins list of companies requiring vaccine for nonunion workers
Experts explain why it's safe for kids to return to school
CDC document warns delta variant spreads as easily as chickenpox
Show More
Here are the Bay Area cities with the lowest vaccination rates
What we know about the delta variant
Things to do in Bay Area: Aloha by the Bay, Sonoma County Fair
'Hamilton' in SF to require proof of vaccination, masks
SF Giants reach trade deal to acquire Kris Bryant from Cubs
More TOP STORIES News