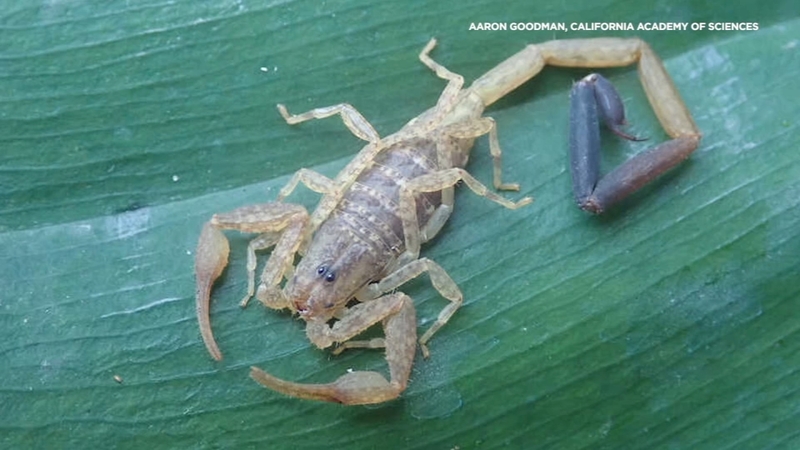 "What we're really talking about is how we conserve humans, how we keep the ecosystems on earth in balance," explains Esposito.

She points to the unusual bark scorpions she and her colleagues collected and described this past year. Instead of residing near the ground, they thrive in the tree canopy of tropical rainforests in Mexico and Central America. When that canopy is disturbed enough, she says they drop from site, perhaps reflecting pressures on rainforest itself. Not unlike recent fires here in California.

"The forest dwelling scorpions in California that live in the forest that have been experiencing severe fires are gone. They're missing from that ecosystem, and who knows how long it's going to take them to come back," says Esposito.

And documenting previously undescribed creatures and the ecosystems that support them is a core mission at the Academy. This last year alone, researchers identified more than 70 species of plants and animals. From sea stars around Easter Island to a pygmy pipehorse living near the coast of New Zealand. From endangered guitar fish native to Madagascar to easter egg weevils discovered on the mountain tops of the Philippines.

"And so in many cases, different species have different significance. So things that are top predators, like sea stars, or sharks, when they are lost, top predators can have immediate effects on how this ecosystem is running,' says the Academy's Chief of Science Shannon Bennett, Ph.D.

Wildlife experts help restore a colorful part of the Bay Area's ecosystem, Variable Checkerspot Butterflies that were extinct in San Francisco's Presidio since the late 1970's.

Bennett says pressures can range from climate change to human activity. Identifying the unknown species is sometimes a painstaking process involving high-resolution imaging and even DNA analysis. Researchers say it's often a race against time,

"And so with new technology like DNA sequencing, with citizen scientists out there documenting what's in their everyday world, we're doing this faster and we're doing it better. But we need to continue to increase that rate if we're ever going to stand the chance of reducing biodiversity loss on earth," Esposito maintains.

And you can learn more about these species in a virtual event, happening this Thursday. Some of the describing researchers for this year's collection will be joining to chat in more detail about their finds.