They are called paleo valleys. Created thousands of years ago, with the help of powerful glaciers in the Sierra.
KGO
By Spencer Christian and Tim Didion 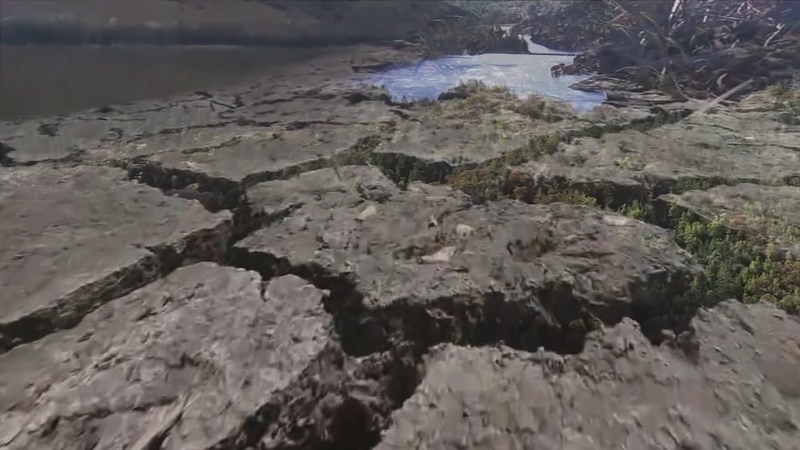 SAN FRANCISCO (KGO) -- For California's water experts, months in the air could soon reveal secrets under the ground, including the remnants of ancient waterways hidden for thousands of years. It's a discovery that could be key to recharging the state's depleted groundwater.

Katherine Dlubac, Ph.D., is overseeing the high-tech survey for the California Department of Water Resources.

"What we're looking for with these potential recharge sites in areas where we have a pathway or recharge connection, between the surface of the earth and the aquifer itself," Dlubac explains.

To help find those channels, helicopters deploy spaceship-sized antennas, ping the ground with electromagnetic signals, mapping the geology deep below the surface. The technique was piloted in California by researchers at Stanford, led by prof. Rosemary Knight Ph.D.

Knight's work helped produce 3D maps, locating porous materials like sand and gravel that allow water to flow deep into the aquifer. But while the flights are locating potential recharge locations up and down the state, a specific type of site could turn out to be the most intriguing.

You can't see the sites with the naked eye. That's because they were created thousands of years ago, with the help of powerful glaciers in the Sierra carving out what is now being called paleo valleys.

"These were ancient rivers that came down off of the Sierra," explains environmental writer Erica Gies.

Gies describes the Paleo Valleys in her new book, Water Always Wins -- Surviving in an Age of Drought and Deluge.

"They can be a mile wide, and a hundred feet deep," she adds.

Researchers say the glacial run-off carved out the deep canyon-like rivers, but when the ice began to melt centuries later, violent flows rained down tons of gravel-like material, covering the channels.

UC Davis researcher Graham Fogg, Ph.D., and his then-graduate student Gary Weismann - predicted their existence in the 1990s. Then, in a painstaking process, they used well-drilling samples to help locate the first documented paleo valley near Fresno.

"So these paleo valleys are big, fat avenues, just sitting there, right below the modern soils that have a high capacity to receive recharge, and to, in essence, funnel it out into the rest of these, these aquifer systems," prof. Fogg explains.

They believe there may be more than a dozen paleo valley's running through California's Central Valley. And in a major breakthrough, professors Fogg and Knight confirmed that electromagnetic flights should be able to spot them.

"So we went to the area where Graham and Gary had identified one of these deposits, we laid out closely spaced flight lines, we flew over the area and we found it. So pretty exciting," says Knight.

And with climate change threatening to disrupt the normal months-long snow melt cycle in the Sierra, exploiting the paleo valleys to capture the boom and bust run-off could be critical. Rather than trying to build new above ground reservoirs, professor Fogg and others have proposed diverting a percentage of the floodwaters into the porous channels.

"And there are locations where you could accomplish a lot of recharge. So if you're looking for a place to put recharge waters and have a big impact, have a big bang for your buck, so to speak. Those would be you know, Easy Street locations for that kind of thing," says Fogg.

Researchers from the California Department of Water Resources are busy examining incoming data from the electromagnetic surveys. They believe some sites could be used for recharge ponds or injection wells to replenish groundwater, or simply protected from development.

"There aren't that many additional watersheds that have not been dammed. And so we're really trying to look at how do we best utilize our natural water storage infrastructure, which are our groundwater basins, which have an order of magnitude more storage capability than our surface reservoirs," says the department's Steven Springhorn.

In essence vast underground reservoirs that could soon become reachable -- through ancient pathways.