Thompson has found 4,000 California wells in 40 years since he was 10-years-old.
KGO 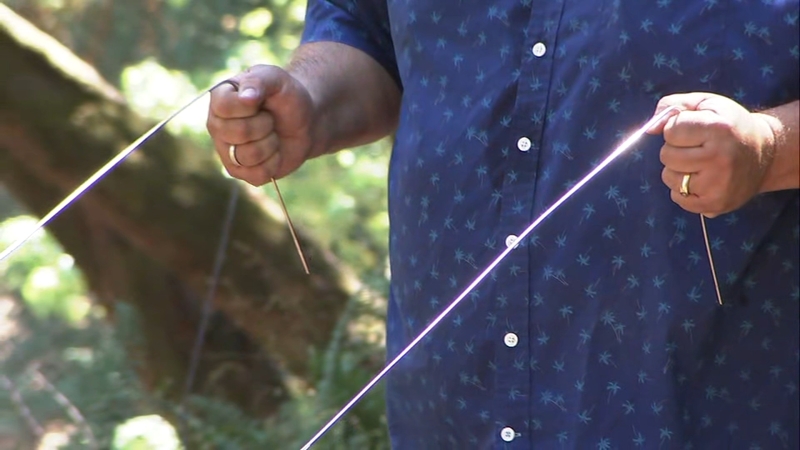 CONTRA COSTA COUNTY, Calif. (KGO) -- Upper Bollinger Canyon is as arid as any place in our region. You'll find no sign of water, but that doesn't stop a determined dreamer like Michael Carilli.

"I want to put a house up here," he said. Carilli must dig a well to make that happen -- but where?

"I'm a dowser. A diviner. A Witcher. Some people call me a warlock," said Thompson.

During this drought, people have been booking his services three weeks in advance, trusting in his hands and two stainless steel divining rods. Thompson has found 4,000 California wells in 40 years since he was 10-years-old.

"It has been passed down from my grandfather to my uncle to me," he said of his sixth sense.

RELATED: 8 simple ways to save water as California faces worst drought in decades

Academics like to say that dowsing or diving has no more scientific evidence than random chance. Still, references to the practice date back to biblical times. Skeptics say that in areas with plenty of rain, underground water is easy to find. But in a time and place and drought like this? That's a test.

"This drought is bad. Does that make business good?" we asked.

The city of Healdsburg cut down water use by 40% for businesses and residents, leaving residents with potential fines.

As he paced back and forth, pointing his rods at ground, the dowsing process looked simple, but quickly became mystical.

"You have to get into a deep meditative state. You can't have any thoughts go on while you're in the process. Be sensitive to the land."

Thompson said those 36-inch steel rods respond on their own, without batteries or technology, obviously.

"It feels like a large magnet," he said. His body appeared to amplify whatever is going on far below, and then the divining rods cross. As he happened, he scratched at the land with his foot. "There's a spot right here. Sweet spot. X marks the spot."

The vein of water Thompson said he found is 6 feet wide, not far from another well he identified seven years ago.

He used the rods to predict that drills will need to reach 220 feet to reach that water. He also knows how much water that well will yield: "Between 10 and 12 gallons a minute."

Michael Carilli certainly believes in dowsing. "It worked before. I can't explain it and I'm paying for it!"

If Thompson's track record is a guide, you can believe it.

"I've got the gift of the third eye."

And the best of jobs in the worst of droughts.