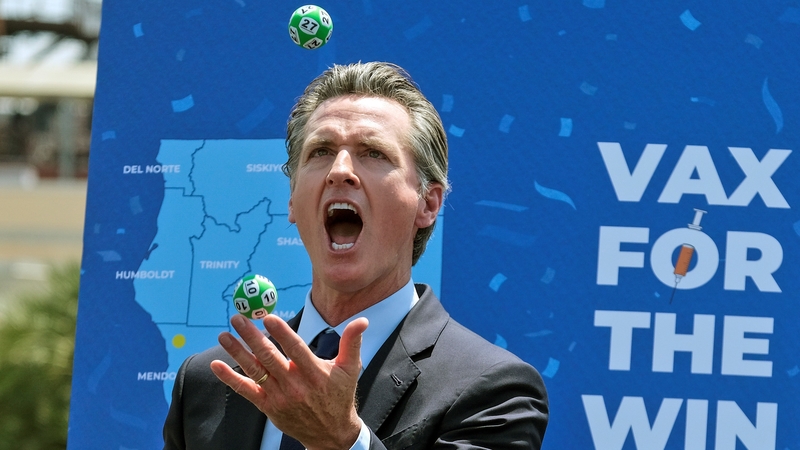 SAN FRANCISCO (KGO) -- As Gov. Gavin Newsom announced yet another new vaccine incentive last week -- 50,000 free tickets to Six Flags, if you're wondering -- he made the case that the lotteries, freebies and gift cards are making a difference in the race toward herd immunity.

"Turns out these incentives have worked," Newsom said. "California lays claim as one of the only states that's seen a week-over-week increase in vaccination doses."

During that press conference, and in a recent press release, the governor cited a 22% increase in doses administered week-over-week as evidence.

But the data shows a much more complicated story (and we'll get to that 22% number in just a bit).

The graph below shows the number of COVID-19 vaccine doses administered across the state every day since December 2020. You can also click the dropdown menu to see individual counties. The line shows the seven-day average, which helps level out the differences between weekdays and weekends.

Having trouble viewing the graph above? Click here to open it in a new window.

For statewide totals, you can see the number of daily vaccinations climb steadily from December 2020 through April 2021 as supply grew and eligibility gradually expanded to more people.

From April to May, the number of daily doses administered was in steady decline. You can see a small increase after May 10, when the Pfizer vaccine was granted emergency use authorization for 12 to 15-year-olds, but then the line returns to trending downward.

Then you'll see another small bump in early June. Could this be a sign the vaccine incentives are working? Newsom says yes, but there's something important to consider about those dates.

The data shows a sharp drop in vaccines on May 30 and 31 -- Memorial Day weekend. In the days after, it appears as if the number of vaccine doses rise substantially, when they're really just returning back to normal levels.

That's where Newsom gets the 22% figure from. There was indeed a 22% rise in doses administered between the week of the holiday (May 27 through June 2) and the week after (June 3 to June 9).

So is this just a fluke in the data or are the incentives really having an impact?

"I think what it did was slow the rate of decline," said UCSF epidemiologist Dr. George Rutherford. "If you look at the slope of the line before the (lottery) announcement, it changed from going down at a certain angle to flattening up and even going up a little. Now it's sort of going down again but it's going down at a slower rate."

Even slowing down the decline is significant, Rutherford noted, when we're dealing with a group of people who so far have been hard to convince.

We asked the California Department of Health if these incentives are having a significant impact. Sami Gallegos, press secretary at CDPH, said there has been an increase in the completion rate (the number of people who actually get both doses of the two-dose vaccines). The completion rate went from 89% when the program was launched to 92% on June 16.

The state has seen that 3% increase, plus a "sustained level of 1st dose administered, which is important because the state was on the path towards declining 1st dose rates," Gallegos added.

It can be hard to really evaluate if the incentives are working because we don't know what the trends would have looked like without them. California is still vaccinating more people every day. Over 57% of the total population and more than 70% of adults have received at least one dose. That's higher than the national average.

Is it the chance to win money that convinced people to get vaccinated?

See the trends for the Bay Area below:
Having trouble viewing the graph above? Click here to open it in a new window.