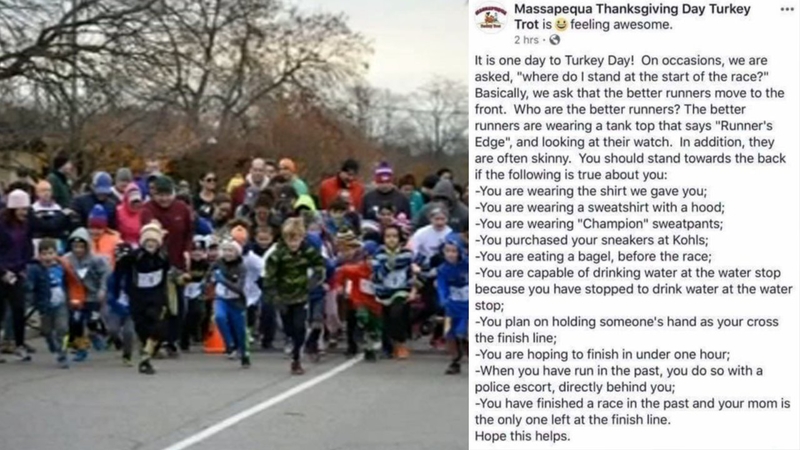 MASSAPEQUA, Long Island -- They are called Turkey Trots, fun races around Thanksgiving to burn off calories.

It's an annual tradition in Massapequa, but a Facebook post has everyone squabbling over this year's run.

"I think it's a little aggressive," said Michael Miglione, a runner.

Many runners are shaking their heads Wednesday night.

The Massapequa Turkey Trot is a local tradition, a five-kilometer road race, raising tens of thousands of dollars to fight leukemia and lymphoma.

But their last-minute race instructions, posted on Facebook, are being seen by many as elitist and rude.

"You should stand towards the back if the following is true about you:
- You are wearing the shirt we gave you;

Reaction was swift and to the point.

"How unprofessional of you," wrote one woman. "Think before you post. Always a shred of truth and thoughts come out in tasteless posts. Shame on you."

"Where the hell is the apology," wrote another.

The race was first organized in 2010. The start is set for Thursday morning in John J. Burns Park.

Organizers apologized late Wednesday, suggesting it was the work of an insensitive volunteer.

"It was insensitive and inappropriate and we are deeply sorry for the hurt it caused," they posted.

"It's supposed to be a Thanksgiving Day Turkey Trot, it isn't really that serious," Miglione said. "Thankfully, they apologized. Thankfully."