KGO
OAKLAND, Calif. (KGO) -- Nearly 2,000 Oakland city workers are planning a one-day strike this afternoon. The strike was set to kick off at 2:30 p.m.. It's in protest of an unsuccessful five-month negotiation with the city over fair wages and worksite safety.

"We have an understaffed labor force," said Lina Hernandezwith the Service Employees International Union Local 1021. "We're working with more than half a labor force that is temporary and part-time workers, with no benefits, like health care and who receive no contributions to the city's retirement plan."

The union also claims city staffing levels are the same as they were during the recession of 2008.

City officials say they are continuing to negotiate, but want an agreement that's financially best for both sides, including a 4 percent cost of living wage increase over two years, plus a 2 percent one-time settlement incentive.

Nearly 2000 @CityofOaklandCA employees will walk off the job for one-day strike, just as @LibbySchaaf set to give State of City address. pic.twitter.com/iylt2zZnn0

"We've been bargaining for a long time, for 5 months, " said Mayor Libby Schaaf. "I'm very confident we'll reach a resolution. This is part of the process. When you get close to resolution, emotions go up."

The one-day strike comes as Schaaf is set to give her State of the City address at 6:30 p.m. Union members say they will be outside picketing while the mayor is delivering her address inside the Islamic Cultural Center of Northern California at 1433 Madison Street in Oakland. 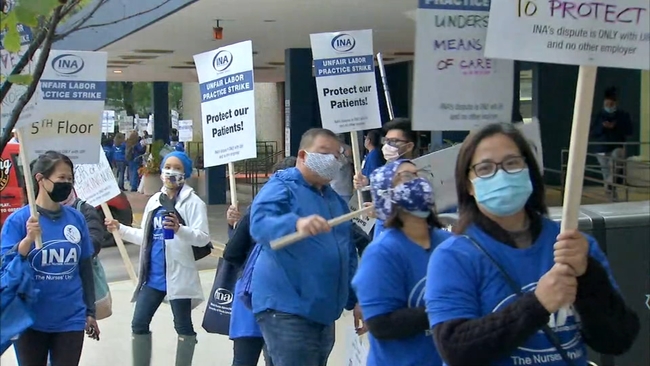