Coronavirus concerns: Despite warnings to avoid large crowds, Dub Nation shows up to support the Warriors 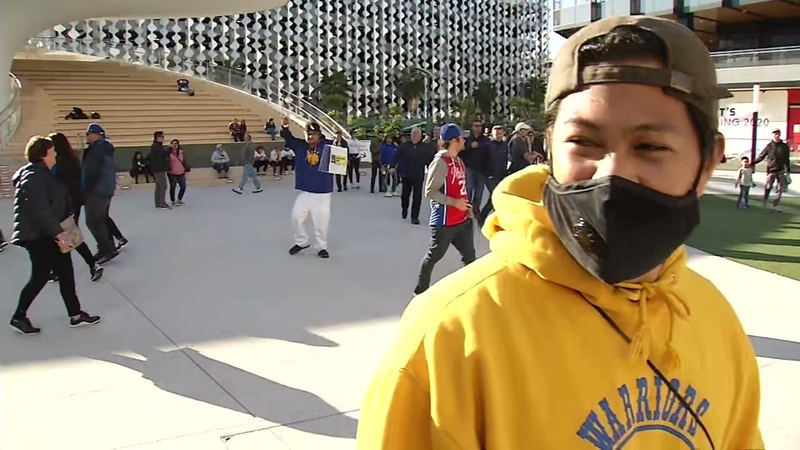 Coronavirus concerns: Despite warnings to avoid large crowds, Dub Nation shows up to support the Warriors

SAN FRANCISCO (KGO) -- Despite warnings to avoid large crowds, Golden State Warriors fans came out to support their team, who hosted the Philadelphia 76ers in a 118-114 win at the Chase Center.

Eugene Ramos, who was wearing a face mask, says he knows that several people tested positive for the novel coronavirus in San Francisco. The threat isn't big enough to keep him home, but he is being cautious.

"I want to take precautions, just in case. I'm not full-on paranoid, but why not (be prepared)," he says about wearing the mask.

RELATED: Damion Lee puts tough outing in past while lifting Warriors past Sixers

Lili Monosco and her two young sons were pumped for their first-ever game at Chase Center. They were hoping to see Stephen Curry on the court, but he was out sick with the flu.

She knows the about the advisories say to stay away from big crowds, but she says her family is well prepared.

"You are always taking a risk if you go outside in crowds, but we are not sick. Hopefully no one around us is sick. We will wash our hands, and take precautions," explains Monosco.

Signs were posted at entrances to the Chase Center advising people who are feeling sick to stay out. And inside, there were many empty seats.

RELATED: Stephen Curry diagnosed with influenza A, ruled out vs. 76ers
Coach Kerr says a team doctor spoke to the players earlier in the week about the COVID-19.

"It's a concern, but we're doing our job to come in and get ready for the game and play the game and the league will tell us what would be next," said Kerr as he addressed the media before the start of the game.

The NBA is proposing to ban fans from games as the threat of the coronavirus grows. It's a proposal that isn't popular with many fans.

"If you want to be safe, just stay home and watch the games at your house. But the NBA shouldn't not put a blockade or keep fans away from watching the games," says Ramos.

The NBA isn't the only league considering playing in empty arenas. The NHL is discussing a similar proposal. And the International Hockey Federation announced that it will cancel the women's world hockey championships.