Instead of a tip, Pennsylvania server finds 'MASK' written on receipt 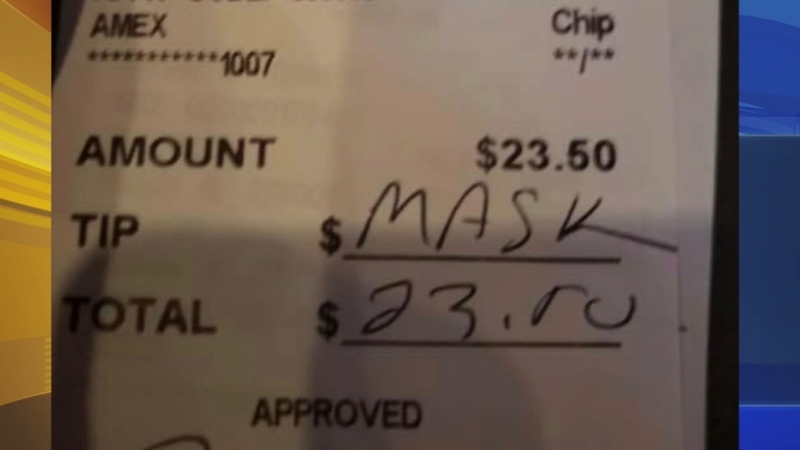 Instead of a tip, waitress finds "MASK" written on receipt

ARDMORE, Pennsylvania -- Mask can be a four-letter word when it appears on a restaurant receipt, instead of a 20% tip.

That's what happened at John Henry's Pub in Pennsylvania on Sunday. The server was understandably frustrated.

"I was just surprised. I was shocked," said Jamie Ledwith.

She explains there was no heated exchange beforehand.

"When they came in they walked through the bar without their mask on. So I asked them politely, 'If you're walking through the bar, or standing, just put your mask on until you're seated,'" said Ledwith.

Ledwith told her boss what happened when she opened the bill.

Kathy Kearney, who's owned the pub for 15 years, posted the receipt to Facebook.

"The reactions and comments started immediately flooding and I think there was one negative versus hundreds of positives comments," said Kearney.

In turn, people started to step up, and show support.

"Somebody did leave me a card under the door with a little bit of money in it and their kids signed the card. That was super sweet," said Ledwith.

In general, there's no issue with mask enforcement at all at John Henry's Pub, Kearney said. The goal: a safe and comfortable dining experience.

"It has been amazing, really amazing. You know what, I also want to give people a pass. This guy was probably just having a bad day. And that's okay, we all are going to have bad days. It's been a long seven months," said Kearney.

Both women say they really enjoy working again. Jamie was out of work for six months because of the pandemic.