Patients forced to the hospital on fire engines due to delayed 911 response times in Alameda Co. 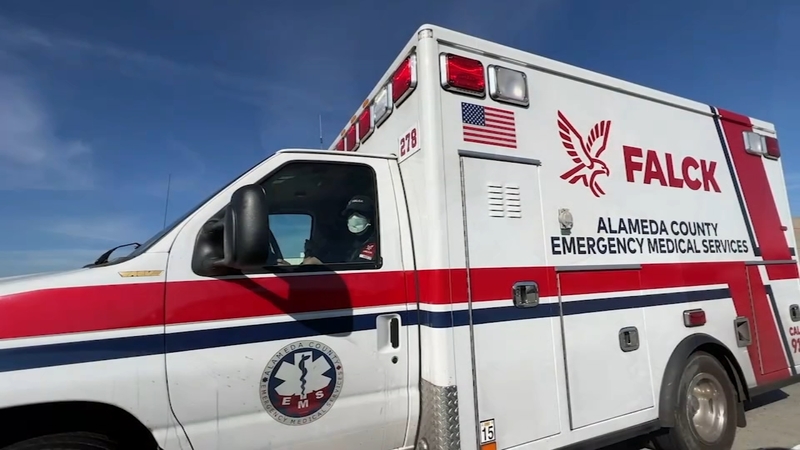 ALAMEDA COUNTY, Calif. (KGO) -- The response times for hundreds of critical 911 calls failed to meet compliance standards in Alameda County this past December -- And it's been that way for months.

Alameda County is contracted with the European-based ambulance company Falck. The company is expected to respond to life-threatening emergencies within 10 minutes.

"We were waiting for 20 to 25 minutes," said Pleasanton resident Don Galli.

"They said let's do something for your pain because it's going to be awhile before we get an ambulance," Galli said. "We're having some problems."

Stephanie Sierra: "Do you think it's acceptable for a priority one call to wait 20 to 25 minutes?"

Troy Hagen: "That is not the goal. That is never the goal. We want to respond within 10 minutes."

According to the company's contract, life-threatening medical calls requiring a lights and sirens response are classified as "code 3." In neighborhoods like Pleasanton, response times for code 3 calls should be within 10 to 14 minutes, depending on the priority level of the emergency.

Intensive care units across hospital systems in five Bay Area counties are "overwhelmed," according to an ABC7 News I-Team analysis from mid-January.

The company's contract requires it to meet response time standards 90 percent of the time. But compliance reports obtained by the ABC7 News I-Team show Falck failed to meet that standard in two of the county's regional zones - East Metro Urban and North Metro Urban -- in December of last year. Prior to that, Falck failed to meet standards in three of the county's regional zones -- East Metro Urban, North Metro Urban, and South Metro Urban - from August to November last year. You can see the compliance reports on the Alameda County EMS website.

"This has probably been the most challenging couple of months in my 33 year history of doing EMS," said Hagen. "Just a combination of many different factors that came together this fall."

Alameda County Emergency Medical Services, the agency overseeing the county's ambulance logistics, fined Falck $215,000 last September for failing to meet standards. The I-Team asked if there were any other subsequent fines, but have yet to hear back from the company.

Hagen said the two biggest factors that contributed to non-compliance are staffing shortages and long patient drop-off delays at hospitals.

"We have multiple ambulances at one hospital waiting to transfer their patient over," Hagen said. "So they're out of service sometimes up to hours for a single crew to deliver a patient."

Chief McDonald: "It's a snowball effect. It starts in one county, but then it spreads out like a ripple effect. We get further behind in being able to respond to the emergent needs of our community."

Stephanie Sierra: "Are you hearing fire crews are having to transport patients on the rig of a fire engine in order to get them to the hospital?"

Chief McDonald: "We have absolutely heard that... It's an unsafe condition and we can't provide the appropriate level of treatment and observation for patients in the way that they deserve."

While staffing shortages and long hospital wait times are impacting Falck, they don't appear to be an issue in other counties.

Santa Clara County, which has a slightly larger population than Alameda County, is contracted with the ambulance company, Rural Metro. Unlike Falck, Rural Metro was in compliance for all county zones last year, despite dealing with similar impacts from the pandemic.

RELATED: Is 2022 the last year of the COVID pandemic? What experts say could come after omicron wave
EMBED More News Videos

Some speculate that the omicron variant could mean the beginning of the end of the COVID-19 pandemic. Here's a look inside hospitals and labs trying to answer that question.

"We've shown steady improvement since it was at its worst a few months ago," Hagen said. "I think we're on the pathway to getting everything within contract compliance."

The company has improved since the I-Team first started looking into its delayed response times. According to Falck's January 2022 compliance report released late Monday, the company is meeting response time standards in all zones across the county for the first time in five months.

"If there's a staffing problem, that's something that needs to be fixed," said Galli. "This isn't the cable company where there's a 30-minute window and you can learn to live with it if they're late."

Hagen says Falck is short at least 50 EMTs and paramedics. According to the company's website, there are six open positions in Northern California - two of which are EMT positions and one paramedic position - all posted within the past month.

The company's contract with Alameda County is in effect until 2024.