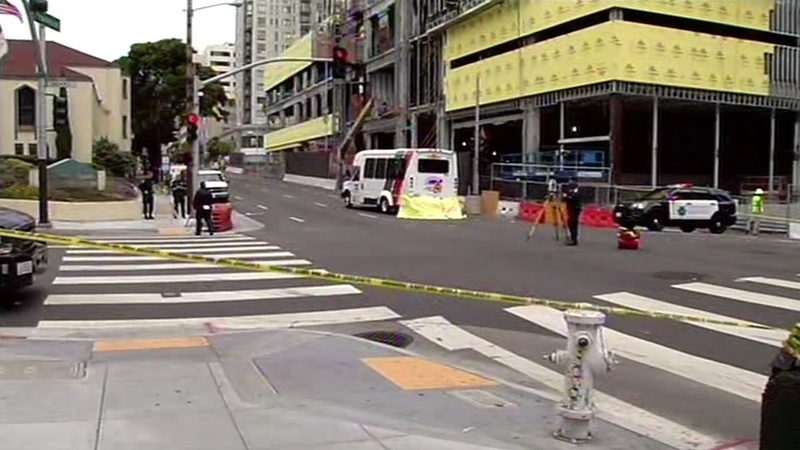 SAN FRANCISCO (KGO) -- San Francisco police are investigating after a woman using a walker was struck and killed by the very vehicle in which she had been riding.

The deadly accident occurred around 10:45 a.m. The victim, who was using a walker, had just gotten off a paratransit van and was crossing busy Franklin Street at Geary Boulevard.

Police say she was in front of the van when the driver accelerated, dragging her 25 feet across the intersection.

"They are still trying to figure out whether it was traffic signals or something else happened, mechanical failure," said San Francisco police Officer Giselle Talkoff.

Police hope video from surveillance cameras at a nearby church will help investigators.

Sources tell us the victim was heading to a meeting hosted by Senior and Disability Action, a group that is sponsoring town hall gatherings regarding safety on San Francisco streets. Daisy Brooks and Joyce Colagos are members.

"We need some type of safety, or somebody here guarding us," said Daisy Brooks of Senior Disability and Action.

Ironically, Brooks was heading to the same meeting as the victim and had also planned to take paratransit, but was running late.

"I'm happy I didn't get on that paratransit today because I was going to come right to that building," Brooks said.

San Francisco paratransit is city run, but uses a private contractor. Muni says the driver is a veteran operator, but it was his first time on the route.