Movement to use unwanted produce growing in the Bay Area

Movement to use unwanted produce growing in the Bay Area

SAN FRANCISCO (KGO) -- Ever wonder what happens to produce that isn't quite up to your standards? A little blemish on your red peppers, an oddly shaped cucumber? Today, there is a movement to reduce waste thanks to people who are using foods that no one really wants.

"Hi, my name is Nick. I like processing surplus vegetables," that's how Nick Balla introduced himself to ABC7.

He also likes to think of himself as a man with "peasant ethics."

"I grew up in rural Michigan and lived in Central Europe we would always just use everything, it's just common sense," he told us.

RELATED: Cranberry growers reportedly want to destroy crops so prices can go up

When you think of it, that's so not urban America where we pick and choose our produce and meats and discard what we don't like.

"You get a hot day and an entire field of peppers get either a little blemish, sunburned and most of the time it doesn't even leave the field becuase the farmer knows he isn't going to be able to sell it," explained Balla.

So, he's has been focusing on using the surplus, the imperfect, and the unwanted from farms.

I’m signing up for this ‘cause I enjoy ugly produce and love the environment. ⁦@Imperfectfruit⁩ pic.twitter.com/bt65txaEFL

"I know that there is all this stuff our there and we could be doing something with it and I do lay awake at night thinking about it," he confessed.

Balla is using those ingredients at restaurants like Duna in San Francisco.

RELATED: Avozilla, the 4-pound avocado as big as your face, can make 18 pieces of avocado toast

Because most restaurants don't have the space to process hundreds of pounds of produce, Balla wants to do it for them. "We'll use large skillets that can braise large quantities of vegetables, steamers, dehydrators," he said.

Some of his fruits and veggies come from Imperfect Produce located in San Francisco's Bayview. They buy what farmers don't want or think they can't sell.

"No, they're not ugly. They look different, just like nature made them. They look a little small, a little big, a little curvy, a little scarred, 'cause they've grown in the ground or on a tree and that's now things look, sort of like people," said Reilly Brock of Imperfect Produce. The produce delivery company was created because one of the biggest amount of waste comes from farms where billions of pounds of produce get left behind.

Those involved in this no-waste movement value what nature graciously gives them. Supply chain interrupted: Here's everything you can't get now 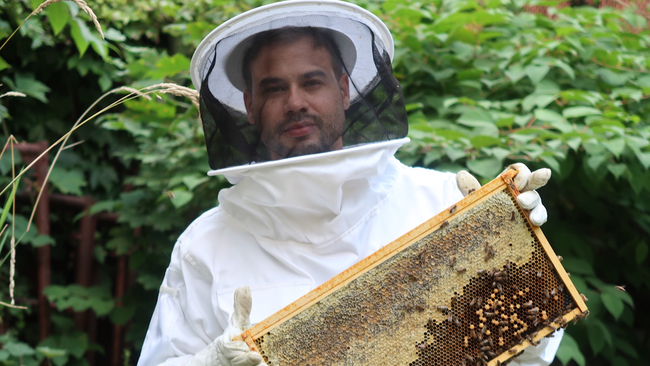