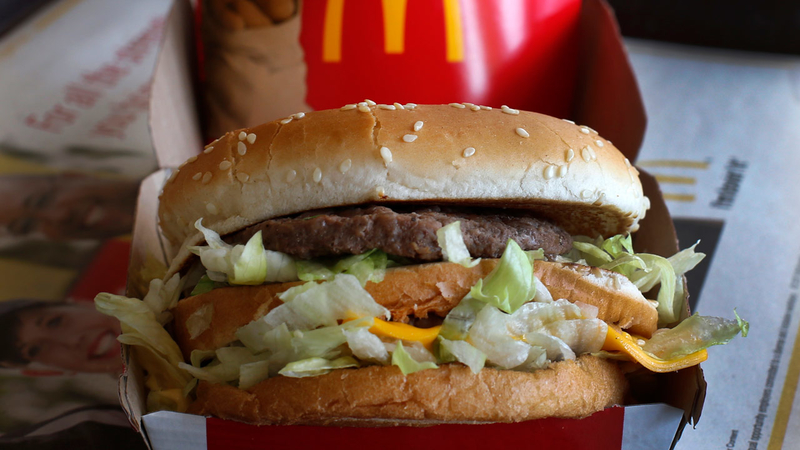 NEW YORK -- McDonald's has cooked up a special coin - the MacCoin - to celebrate the 50th anniversary of the Big Mac. The limited edition "currency" will become available starting lunchtime on Thursday.

If you get a coin, you can redeem it starting on Friday through the end of the year. In exchange, you get a free Big Mac as long as the restaurant you go to is taking part in the celebration. There are five unique coins chronicling the burger's history.

MacCoins are here for #BigMac50! 🙌 TODAY, buy a Big Mac in the U.S. and get your hands on a MacCoin 🍔🎉 pic.twitter.com/dA4E1z9obu

The company is celebrating the 1968 national launch of the double-decker sandwich whose ingredients of "two all-beef patties, special sauce, lettuce, cheese, pickles, onions and a sesame seed bun" were seared into American memories by a TV jingle. But the milestone comes as the company reduces its number of U.S. stores. McDonald's said Thursday that customers are visiting less often. Other more trendy burger options are reaching into the heartland.

The "Golden Arches" still have a massive global reach, and the McDonald's brand of cheeseburgers, chicken nuggets and french fries remains recognizable around the world. But on its critical home turf, the company is toiling to stay relevant. Kale now appears in salads, fresh has replaced frozen beef patties in Quarter Pounders, and some stores now offer ordering kiosks, food delivery and barista-style cafes.

In celebration of the 50th anniversary of Jim's invention, MacCoins will be available in more than 50 countries around the world starting Thursday, August 2, 2018.

The Big Mac remains unchanged, showing just how much McDonald's and the rest of fast-food have evolved.

As with many of its popular and long-lasting menu items, the idea for the Big Mac came from a franchisee.

In 1967, Michael James "Jim" Delligatti lobbied the company to let him test the burger at his Pittsburgh restaurants. Later, he acknowledged the Big Mac's similarity to a popular sandwich sold by the Big Boy chain.

"This wasn't like discovering the light bulb. The bulb was already there. All I did was screw it in the socket," Delligatti said, according to "Behind the Arches."

McDonald's agreed to let Delligatti sell the sandwich at a single location, on the condition that he use the company's standard bun. It didn't work. Delligatti tried a bigger sesame seed bun, and the burger soon lifted sales by more than 12 percent.

After similar results at more stores, the Big Mac was added to the national menu in 1968. Other ideas from franchisees that hit the big time include the Filet-O-Fish, Egg McMuffin, Apple Pie (once deep-fried but now baked), and the Shamrock Shake.

RELATED: Study reveals chemical in McDonald's french fries may be cure for baldness

"The company has benefited from the ingenuity of its small business men," wrote Ray Kroc, who transformed the McDonald's into a global franchise, in his book, "Grinding It Out."

Franchisees still play an important role, driving the recent switch to fresh from frozen for the beef in Quarter Pounders, Easterbrook says. They also participate in menu development, which in the U.S. has included a series of cooking tweaks intended to improve taste.

Messing with a signature menu item can be taboo, but keeping the Big Mac unchanged comes with its own risks. Newer chains such as Shake Shack and Five Guys offer burgers that can make the Big Mac seem outdated. Even White Castle is modernizing, recently adding plant-based "Impossible Burger" sliders at some locations.

RELATED: McDonald's flips its arches in Southern California for women

A McDonald's franchisee fretted in 2016 that only one out of five millennials has tried the Big Mac. The Big Mac had "gotten less relevant," the franchisee wrote in a memo, according to the Wall Street Journal.

McDonald's then ran promotions designed to introduce the Big Mac to more people. Those kind of periodic campaigns should help keep the Big Mac relevant for years to come, says Mike Delligatti, the son of the Big Mac inventor, who died last year.

"What iconic sandwich do you know that can beat the Big Mac as far as longevity?" said Delligatti, himself a McDonald's franchisee.