Police are still looking for the dog's other 3 puppies, which were not located in the bust.
KGO
By Dustin Dorsey 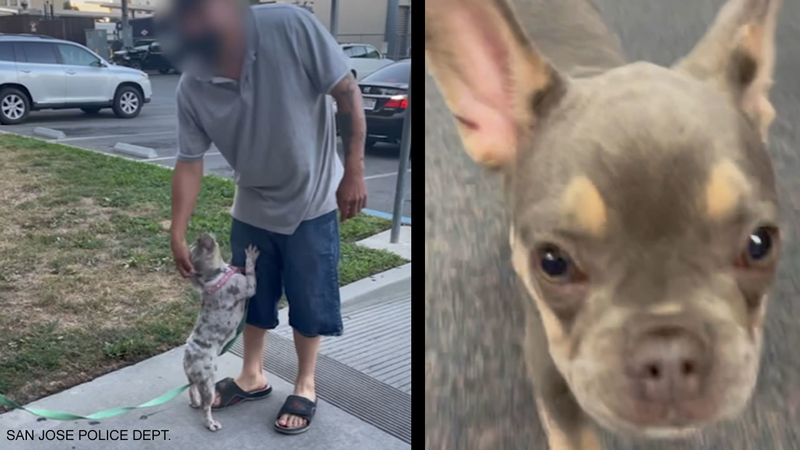 They seized illegal weapons and drugs, but also made another surprising discovery.

The team found a missing French Bulldog and one of her four missing puppies.

With an excited pant and speedy run, Gucci the French Bulldog is reunited with her owner once again.

She was stolen along with her four puppies from her owner's home in San Jose in February.

The dogs' owner does not want to be identified, but he says he is happy to have them back home.

A dog walker has recovered two dogs stolen this afternoon in Oakland, but is still looking for a third one.

San Jose police and the District Attorney's office found the dogs as part of an investigation into three suspected street gang members.

Police arrested the three and say they were linked to multiple serious crimes in the city.
"For us it's a big win. These three suspects were responsible for over ten violent crimes in our city," SJPD Public Information Officer Sgt. Christian Camarillo said. "Those crimes range from violent carjackings, to robberies, various shootings that they were associated with as well as a burglary."

In addition to dogs, the police seized equipment used to manufacture and assemble ghost guns, illegal high-capacity magazines, a ballistic vest, narcotics and a fully-automatic handgun. The gun was just one of the illegal guns police obtained.

SJPD Public Information Officer Sergeant Christian Camarillo says the department is happy to get the illegal weapons and drugs off the streets, but still wants to bring the three remaining lost puppies home to their owner.

"I, myself, own a French Bulldog and know how much these dogs mean to their owners, they are very smart dogs," Camarillo said. "Obviously (the owner) is happy, he's relieved, but at the same time, this isn't done yet. There's three puppies out there that the owner would like back."

If you have any information about the missing puppies contact SJPD.