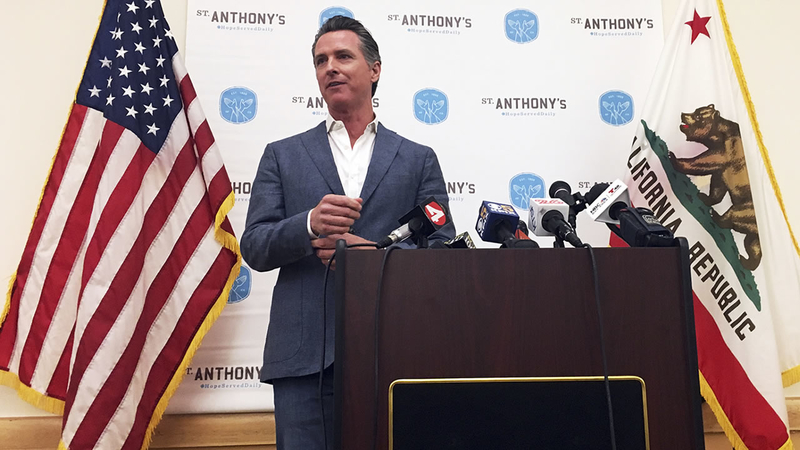 THOUSAND OAKS, Calif. (KGO) -- Gavin Newsom has been a staunch advocate for gun control. On Thursday, the governor-elect spoke candidly about the Thousand Oaks shooting and what we can expect from his administration once he is sworn in.

Despite his vocally anti-gun remarks, governor-elect Gavin Newsom said he wasn't prepared to roll out his anticipated gun control agenda. But given his voting record, one can only speculate that it will be aggressive.

"The National Rifle Association, I'll say this, is bankrupt morally and they need to be held accountable for their rhetoric and their actions," he warned.

Newsom led the passage of Proposition 63, a 2016 voter-approved measure which imposed background checks on ammunition purchases. That goes into effect in January.

But that proposition also called for banning high-capacity ammunition magazines -- limiting them to 10 rounds. That is being challenged in court.
The gun used in the Thousand Oaks shooting had a high capacity magazine that could hold more than 10 rounds.

One of the bills recently signed by Governor Jerry Brown would prevent people hospitalized more than once in one year for mental health issues from owning a gun for life.

The gunman in the Thousand Oaks shooting may have been suffering from post traumatic stress disorder. Earlier this yearm police responded to a disturbance at his house.

Under the law, someone with possible psychiatric issues can be placed in temporary custody. But after he was assessed, the crisis team decided not to detain him.

.@GavinNewsom⁩: “This is America, it’s got to change. This doesn’t happen in any other country.” Governor-elect reacts to #ThousandOaksShooting. pic.twitter.com/HabdgiX2M1