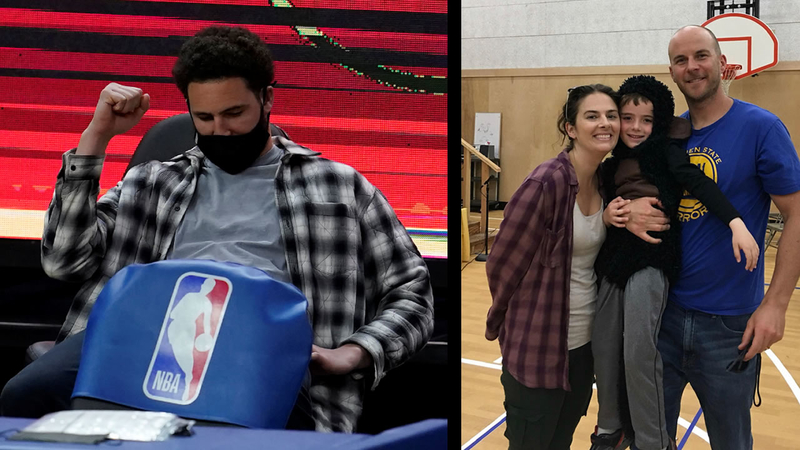 SAN FRANCISCO (KGO) -- It's hard to believe, but Klay Thompson has yet to play a game at Chase Center. The Golden State Warriors superstar has been sidelined for the past two seasons, first with the torn ACL, followed by a torn Achilles.

"Klay's mentality, he wanted to come back in the game, he was ready to go with a torn ACL," said Warriors head coach Steve Kerr when recalling Klay's last game in a Warriors uniform during the 2019 NBA Finals.

Thompson was on track for a "Comeback Klay" type of season, until a torn Achilles in November sent him to the sidelines for a second straight year.

.@KlayThompson is ready to return at an elite level and won't settle for anything less 🗣️💯 #ABC7Now #DubNation https://t.co/onwSD5gxhN pic.twitter.com/s7T7hLQafW

"When it happened, in my mind I knew it happened. But, I wasn't even that emotional because my heart wouldn't accept it at the time," said Thompson.

Once again, Thompson is rehabbing a season-long injury. Insert a lifelong Warriors fan from Eureka to provide Klay some extra motivation through a letter.

"Oh man, it was one of the greatest things I've read in a long time," said Thompson. Klay pulled out his cell phone while speaking to reporters to make sure he got all the information correct. "Let me pull it up, it was incredible. This man, it was honestly guys, it was, it made me realize why I get to do what I do. My guy Jeff Bird," said Thompson.

.@KlayThompson received a letter from a basketball coach in Sonoma recently and revealed why that means so much to him as he continues his rehab from a torn Achilles. #ABC7Now #DubNation https://t.co/onwSD5gxhN pic.twitter.com/9RASf4cAY6

"Well, I'm the dude that wrote the letter," said Jeff Bird, a lifelong Warriors fan from Eureka. "I was thinking about his injuries and how tough it would be to come back from that and I was like well I'm going to write that dude a letter," said Bird.

Jeff, who played junior college basketball at College of the Redwoods, wrote about how his former head coach would have loved to see Klay play basketball.

"Coach Treglown who was his coach, emphasized ball movement, player movement and being a team and unfortunately his coach passed away about 10 years ago," said Thompson.

"It was really kind of crazy that the day he brought it up, just happened to be my 40th birthday, so it's some kind of cosmic," added Bird.

Coming soon on @abc7newsbayarea -- Meet Jeff Bird, the lifelong Warriors fan who wrote a letter to Klay Thompson as he continues his rehab. Stay tuned, we'll have the full story on why this letter means so much to Klay. #ABC7Now #DubNation https://t.co/onwSD4YVTd pic.twitter.com/9hJac5p0qa

I asked Jeff when he watched Klay speak for nearly two minutes about his letter, what stood out the most to him.

"It's just cool. I feel like I connected, he connected with somebody, like caring about watching him play basketball and like his love for basketball," said Bird.

"Just to get that e-mail from Jeff and hear how he knows that would make his old coach feel good about watching us play, that made me feel real good."

There's an outstanding offer for @KlayThompson to get in some swimming in Humboldt County soon. #ABC7Now #DubNation pic.twitter.com/gabQ87cQzD

In part of the letter, Bird wrote this to Klay, "I liked your first championship team by far the best because of the team oriented style, the off the ball movement, and the amount of easy buckets you'd get from backdoor cuts and slipping screens, etc. My friends and I, old Dads at this point, still talk about that regularly and how much our old coach, Coach Treglown at College of the Redwoods, would have wanted to see you and that Warriors team play."

Klay enjoyed Bird's inside basketball knowledge as well as sense of humor.

"Jeff was funny in his letter, he was like 'you know from an old 39-year-old I hope your mind is right. We are watching and we appreciate what you've done.' That meant a lot to me because I know we have a great influence, but you just never know who is watching and that was cool," said Thompson.