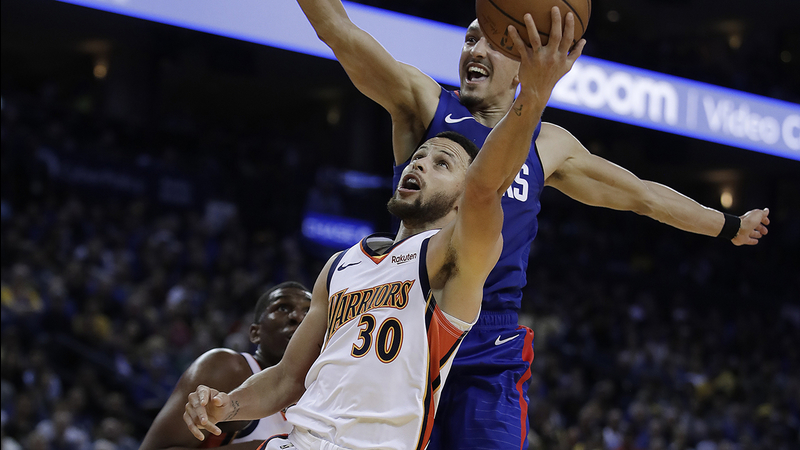 OAKLAND, Calif. (KGO) -- When the Golden State Warriors stepped onto the floor for their final regular season game at Oracle Arena they wore uniforms that honored one of the most celebrated teams in franchise history.

Golden State players decoded to don throwback, white jerseys that saluted the "We Believe" Warriors that made an improbable playoff run in 2007. Unlike three of Golden State's last four teams, the 2006-07 Warriors did not capture an NBA Championship. Instead, they captured the hearts of basketball fans in the Bay Area and beyond.

The Warriors squeaked into the NBA Playoffs with a 42-40 record, just enough wins to earn the eighth and final playoff berth in the Western Conference.

Golden State then stunned the Dallas Mavericks in the opening round, winning the series four games to two. That denied Dallas a chance to defend in its 2006 NBA Title.

"A lot of history Monta was able to be a part of with the 'We Believe' era and then when I got here my rookie year he was that guy," Curry said. "I think for me being able to represent him on the last meant a lot because we were in that backcourt together. And obviously when he was traded it was a tough time in the transition of the organization and things like that. I wanted to pay honor to him in terms of his story and coming out of high school and being able to do what he was able to do. He was an Oakland fan. Warrior fan. Beloved guy. So only right to have him as a last night."

The 2006-07 Warriors also thrust one of the NBA's all-time winningest coaches into the spotlight. Their run to the NBA's second round highlighted Don Nelson's second stint coaching the Warriors. It also served as the pinnacle of former Warrior star Chris Mullin's stint as General Manager and architect of a playoff squad.

For Nelson, the club beat a Mavericks' franchise he'd helped groom into one of the NBA's elite. Nelson had stepped down from coaching the Mavericks in March 2005 and named top assistant Avery Johnson as his successor.

Nelson returned to the sidelines nearly 18 months later, when Mullin persuaded him to come out of retirement to coach a group of players who preferred an up-tempo, offensive style. Mullin himself played under that system for Nelson in the late 80's and early 90's.

Fans themselves helped define Oracle Arena as one of the NBA's toughest venues during the 2007 playoffs. For each of the playoff games Golden State hosted, fans received gold t-shirts emblazoned with the club's rallying cry: "We Believe."

The Warrior's magical ride ended in the Western Conference semi-finals, falling to the Utah Jazz, four games to one.

See more stories and videos about the Golden State Warriors.

Had to bring 'em back

Check out the Dubs' reactions when they got the first look at their Finale at Oracle threads 😏 pic.twitter.com/3KZhS2LW8h