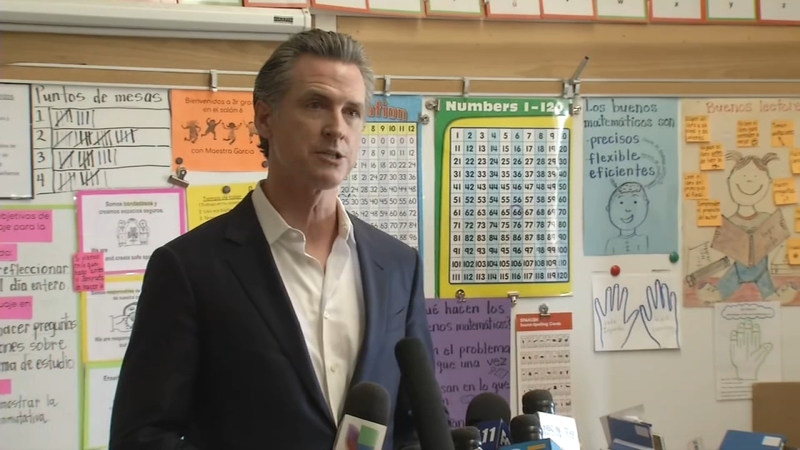 OAKLAND, Calif. (KGO) -- Gov. Gavin Newsom spent his first day back on the job after defeating the recall election at a school in Oakland where he met with students and told reporters he feels more resolved than ever to tackle the array of issues facing California.

Newsom also offered a plea for unity and delivered a message to the millions of Californians who did vote to recall him.

RELATED: CA recall price tag 'could be' more than $300M, secretary of state says, as experts call for reform

"Coming out of this recall I want to turn the page," Newsom said on Wednesday afternoon at the Melrose Leadership Academy. "Express respect and a deep sense of responsibility, not just to those that vote 'no' on this recall, but those who voted 'yes.'"

"They matter and I want them to know I'm going to do my best to have their backs as well," he added.

Big cheers for @GavinNewsom as he spins a basketball 🏀 pic.twitter.com/s8xAWvdfww

Newsom said he chose to visit a school to remind Californians of the importance of setting an example of kindness and unity for the future generations.

"If there's anything that I've learned in the last six to nine months being out on the campaign trail," Newsom said, "Is we've got to disabuse ourselves...of all this false separateness."

Newsom said he does not feel vindicated after defeating the recall, rather he feels "enlivened" and "more energized" to tackle the challenges facing the state.

In his remarks, the governor also addressed how the state is handling safety in schools during the pandemic.

The day after the recall, @GavinNewsom is discussing government & civics with students at a school in Oakland.

He asks students the most important issues they believe need to be addressed. They say #1 climate change, #2 healthcare, #3 homelessness pic.twitter.com/nYRqdeZ0q4

He did not rule out mandating vaccines for all K-12 public school students once the vaccine is approved for children, but said it is not something they currently plan to do.

"There's certainly conversations," Newsom said, "But there's nothing on the table and I want to make that crystal clear. But of course there are conversations."

He said there are many factors that are being considered before making that decision, including the potential rise of any new COVID-19 variants.

VIDEO: What do we know about booster shots for COVID-19?
EMBED More News Videos

Dr. Richard Besser, the former CDC acting director, explains what we need to know about booster shots for COVID-19.