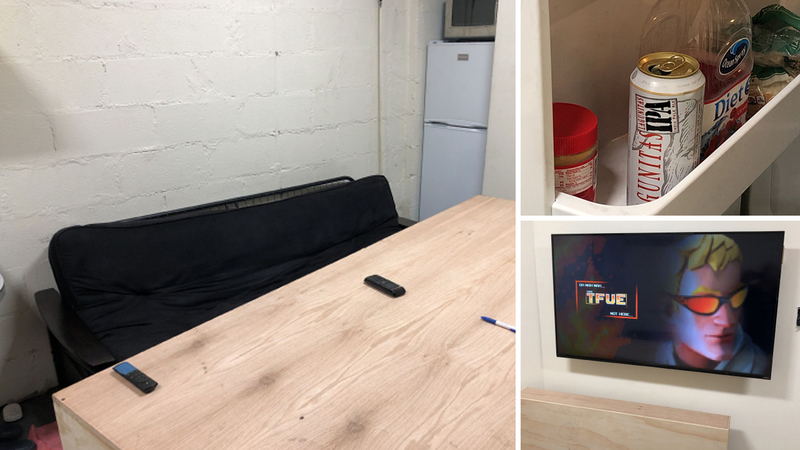 Take a look inside the MTA 'man cave'

NEW YORK -- A man cave can be a great addition to any home, but apparently not at work.

The Office of the MTA Inspector General found the room, complete with a futon couch, a large flat-screen television with a streaming device, air conditioning, refrigerator, microwave, workout equipment, hide-a-way beds and more.

"Many a New Yorker has fantasized about kicking back with a cold beer in a prime piece of Manhattan real estate - especially one this close to good transportation," Pokorny said. "But few would have the chutzpah to commandeer a secret room beneath Grand Central Terminal and make it their very own man-cave, sustained with MTA resources, and maintained at our riders' expense."

The "man cave" was an interior room behind a locked door within a storage room containing what investigators were told were "sensitive supplies."

They say it was even outfitted with customized wooden boxes that could be deployed to quickly disguise some of the room's larger items, such as the futon and the flat screen TV.

During the investigation, Grand Central management told the investigators that they did not even know the storage room existed, let alone that it contained an unauthorized break room.

Consequently, Grand Central Terminal management was also unaware of which employees had keys to the storage room, or the "man cave" inside.

The Metro-North Railroad Fire Brigade stated that the space, located in an unmapped room, presented significant health and safety risks including the inability for rescue personnel to quickly access the room.

The employees were not identified by name, but personal property inside the room apparently identified them as a wireman, a carpenter foreman and an electrical foreman.

The evidence included: a receipt with the wireman's name on it, and the streaming device connected to a hotspot associated with the carpenter foreman's phone.

In addition, two personal calendars and a pull-up bar featured a shipping sticker with the electrical foreman's name were found. The streaming device was reportedly registered to him as well.

The three employees were served with disciplinary charges and they have been suspended without pay pending resolution of each of their disciplinary matters.

Investigators say they learned of the "man cave" through anonymous tips to a complaint hotline.

Pokorny said Metro-North Railroad Security failed to take any steps to investigate an initial complaint referred to it by the President's Office.

The report, including pictures, findings, and recommendations, is here: https://mtaig.state.ny.us/assets/pdf/20-23.pdf

Metro-North President Catherine Rinaldi released a statement in response to the report saying, "The behavior described in the IG's report is outrageously inappropriate and is not consistent with Metro-North's values and the commitment that we have to providing safe, reliable and cost-efficient service to our customers. All three employees were immediately suspended without pay and are being disciplined in accordance with their collective bargaining agreements."