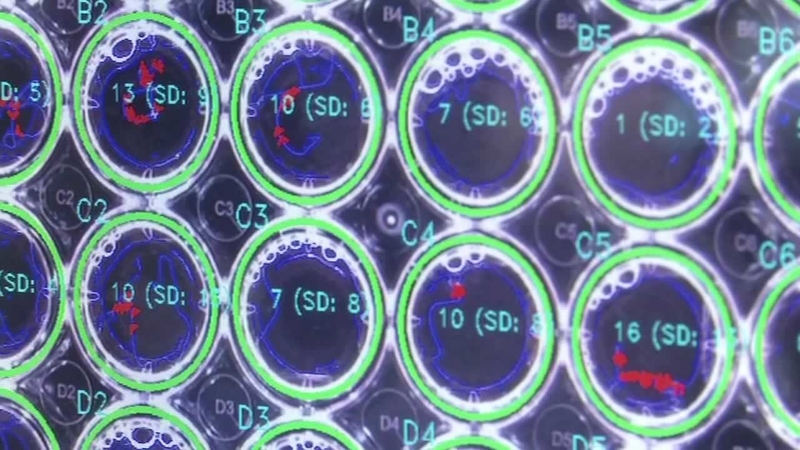 SAN FRANCISCO (KGO) -- Researchers in the Bay Area are joining in an innovative campaign to treat diseases and health threats that impact millions of people, but are often overlooked. And their solutions involve thinking outside the box.

One example for anyone studying dangerous parasitic worms is the Worminator. The unusual device was built by researchers at UCSF to study the worms responsible for River Blindness, a disease that affects thousands of people in Central America.

So big, according to McKerrow, that you can't squeeze them into the small sample plates that are typically used to test thousands of potential drug compounds at once. To get around the problem, the UCSF team designed the Worminator to spy on the worms in a different way. Using cameras and high-speed software to scan the activity in each sample well.

Researchers have now identified a drug already approved by the FDA for other uses. McKerrow hopes to bring it to the developing world to treat River Blindness, and more.

"In fact there was a drug that not only killed the worms but also killed a single cell organism that causes another disease in India," he said. "So now there are clinical trials planned for both of these applications."

The project just received a major boost from the Bill & Melinda Gates Foundation and the Carlos Slim Health Institute. The two organizations announced a $6 million grant to be shared by several teams dedicated to fighting neglected diseases and other health threats in an area stretching from Mexico to Central and South America.

Berkeley professor James Holston, Ph.D., is hoping to attack the fast spreading Dengue virus. His strategy is to go after the mosquitoes that carry Dengue, not by killing them, but by draining and eliminating their breeding spaces.

"We want to get them before they've hatched," Holston said.

His tool is crowd sourcing, and the Dengue Torpedo. Users compete for prizes by identifying and cleaning up areas where the mosquitoes breed, and then documenting their work with texts and cellphone photos.

"And we recruit local businesses to donate prizes and they can be relatively small," Holston said. "They can be you know some face cream, they can be a tooth brush, they can be a bicycle, a tablet, a cell phone. People like to win things."

He says the site has already launched small armies of volunteer in areas like Brazil, where cases of Dengue have been rising rapidly. The idea is not to take over for government health departments, but to empower more people to tackle the threat in homes and neighborhoods.

"There are so many aspects of daily life that in fact, citizens can take command of," he argues.

While the technologies like the Worminator and a crowd sourcing platform may not appear to have much in common, the share a common goal -- providing and effective and inexpensive solution for health threats that are often forgotten or ignored by governments and large drug companies.