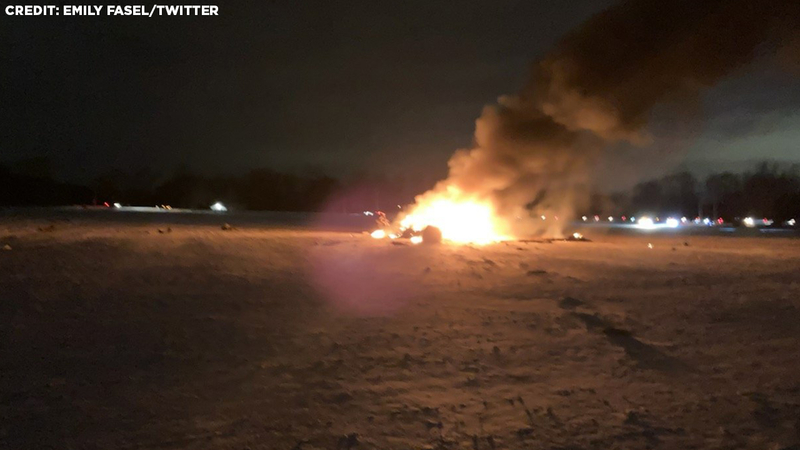 MENDON, New York -- Several soldiers were killed in a helicopter crash in Upstate New York Wednesday, according to officials.

MCSO has confirmed a military helicopter with what is believed to be 3 souls on board went down in a field on W. Bloomfield Rd. In Mendon at 6:32p.m. W. Bloomfield rd. Btwn Cheese Factory & Boughton Hill Rd. remains closed. Grateful for our 1st responder partners:

Officials said they received calls for an aircraft in distress around 6:30 p.m.

Rescue crews found a New York National Guard Blackhawk down and said the aircraft was fully on fire when they arrived on the scene.

Officials said the three soldiers, believed to be members of the New York National Guard, were killed.

The New York National Guard is on the way to the scene to investigate. The FAA will also investigate the incident.

According to 911 reports, officials said the aircraft was flying very low and there were reports that the engine was sputtering.

The New York National Guard said the helicopter was based at the Army Aviation Support Facility at Rochester International Airport and crashed while on a routine training mission.

They are working to identify the soldiers that were on board.

The aircraft was assigned to C Company of the first Battalion.
New York Governor Andrew Cuomo said he's devastated by the crash and will direct flags on all state buildings to be lowered to half-staff Thursday.

Tonight we are devastated by the crash of a New York Army National Guard helicopter in the town of Mendon that killed three of New York's bravest during a training mission.

I'm directing that flags on all State buildings be lowered to half-staff tomorrow.