KABC
TRABUCO CANYON, Calif. -- A man was arrested Wednesday in connection with the Holy Fire, which has burned more than 6,200 acres in the Cleveland National Forest in Southern California.

Forrest Gordon Clark, 51, was booked into the Orange County Jail on suspicion of two counts of felony arson, one count of felony threat to terrorize, and one count of misdemeanor resisting arrest. If convicted on all of the charges he faces, Clark could be behind bars for life.


He is being held in lieu of $1 million bail and is set to be arraigned Thursday. Officials do not believe Clark is connected to any other fires in Orange County.

According to the Orange County Register, Clark owns a cabin in the area that's at the heart of the Holy Fire.

Shane Sherwood with the Orange County Fire Authority said the evidence gathered led them to believe the fire was an intentional act, but are still working through the evidence to determine how it was started.

Sherwood said no witnesses have come forward saying they saw Clark start the fire, but the area of origin is around his residence.

The Holy Fire is not letting up Wednesday as it continues to burn out of control in the Cleveland National Forest for the third day.

He reportedly has had conflicts with his neighbors for years and sent an email warning, "This place will burn" to a volunteer fire chief last week.

The OCFA would not comment on those claims, citing the pending investigation.

Of the 14 cabins in the area of the fire, Clark's is apparently the only one still standing.
Report a correction or typo
Related topics:
orange countyriverside countytrabuco canyonarrestbrush firewildfire
Copyright © 2020 KABC-TV. All Rights Reserved.
RELATED 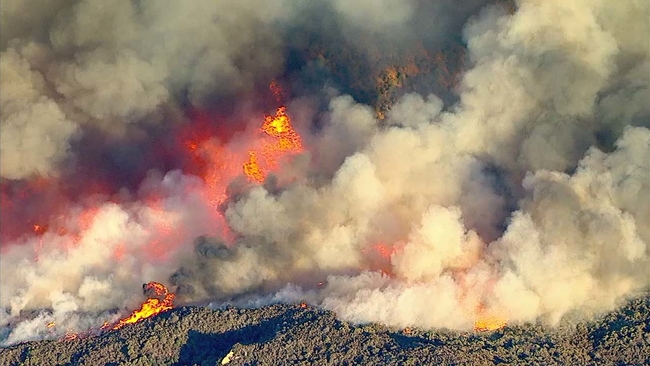