Who is Jimmy Garoppolo? Here's what we know about the face of the 49ers 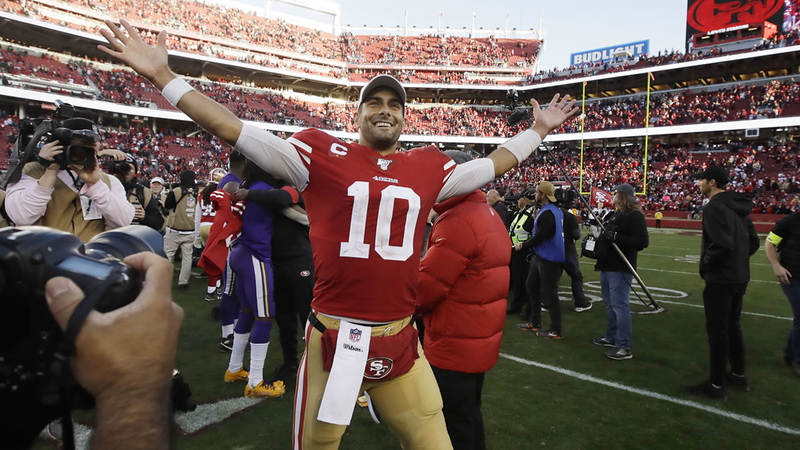 Who is 49ers quarterback Jimmy G?

SAN FRANCISCO (KGO) -- The San Francisco 49ers are all the Bay Area hype as the team has finally resurrected from the Jim Harbough days and prepares to face the Kansas City Chiefs in Super Bowl LIV. At the face of the franchise, of course, is quarterback Jimmy Garoppolo.

On paper, the statistics don't reflect his true value to the team. So let's ditch the data for now and find out, who is the man in the number 10 jersey?

To fans, he's often "Jimmy G," or "Jimmy GQ," which is the official nickname his adorers anointed him with.

Yes, there was a sanctioned vote through a bracket-style tournament by Niners Nation to dub him an official nickname after the Tom Brady-understudy caught fire in his 2018 season, winning four consecutive games with the 49ers.

In case you're curious, "Optimus Dime" was the runner-up and looked like this:

The ode to Transformers would have been a cute pairing with cornerback Richard Sherman, AKA "Optimus Prime," circa de 2012, a title he even used to use as his Twitter handle.

Luckily, "Jimmy GQ," as in the men's magazine, won the tournament with a sound 76 percent of the votes.

There are other nicknames that haven't quite caught on, but they do exist, according to multiple football sources, including "Great Garoppolo" and "Prince Aladdin."

From a 2014 article in the Boston Herald: "Someone changed his locker nameplate to read "PRINCE ALADDIN," which is apparently an inside joke with his teammates. Our astute deductive reasoning skills suggest Garoppolo's teammates make fun of him for looking like the main character of the Disney movie."

The San Francisco Zoo named one of their snow leopards Jimmy G. Of course, the real Jimmy has since stopped by to say hello to his cat-counterpart.

Sorry ladies, but there's not much intel here. If Mr. GQ has a girlfriend, we wouldn't know. He tends to keep the love life out of the spotlight and has even said he's a private person who doesn't like to post much to social media. Maybe it's a lesson learned after he was spotted with adult film star Kiara Mia; a date that got tons of media attention and is still finding its way into headlines to this day.

There was also an obscure tweet from a sports gossip page in November, alleging he was dating a woman in Sacramento who works VIP bottle service. However, there has been zero factual evidence to verify this information.

What we do know:

That's pretty much all we know about the 28-year-old's dating history, but what most people want to know is who lies in his dating future.

He's a Scorpio. So if you believe in that sort of thing, the odds favor Cancers, Virgos, Capricorns and Pisces. Sorry Scorpios and Leos, the stars say you're the least compatible.

We do know of one special woman in Jimmy G's life: his mom.

He doesn't post very often on social media, but Mama G is one of the few who made the cut for his page, along with his brothers (he has three of them!) and close friends.

It appears he's a family-oriented kind of guy and enjoys spending quality time with loved ones.

Jimmy Garoppolo's ethnic background is a combination of German, Italian, and Polish.