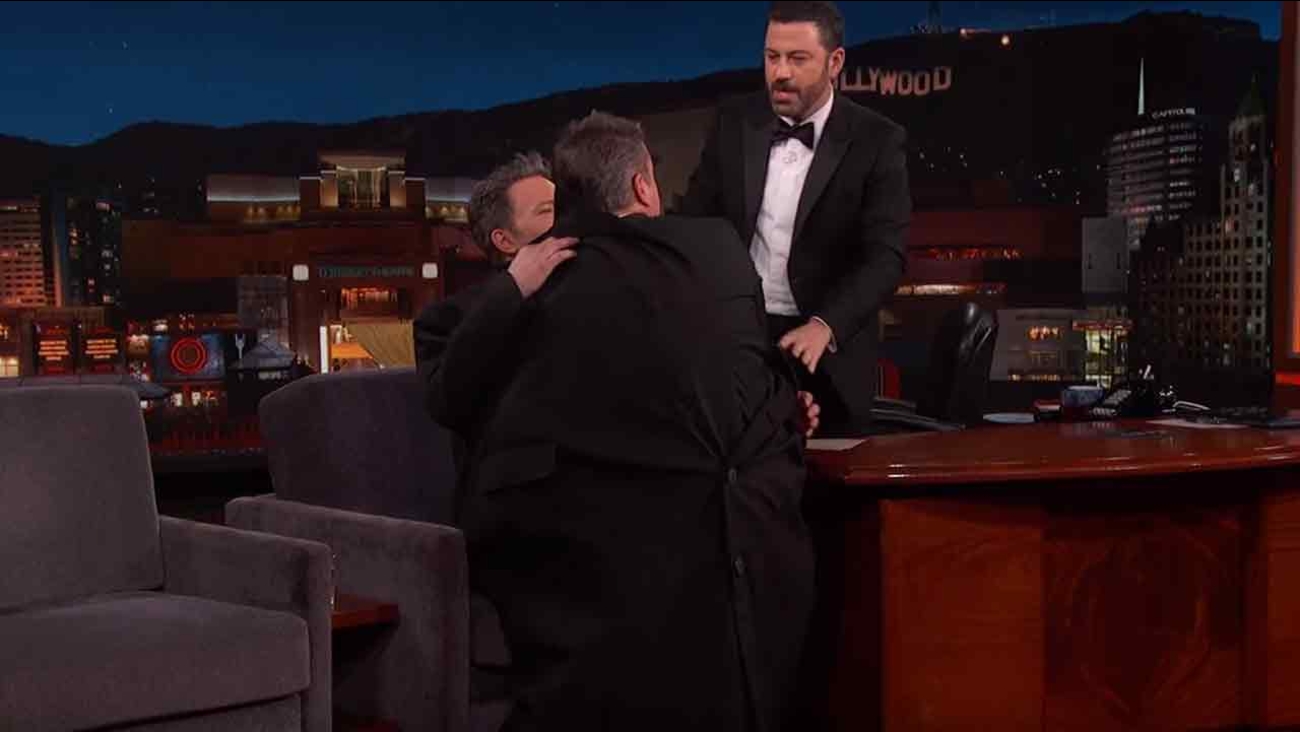 Matt Damon finally got his chance to be on the Jimmy Kimmel show. Sort of.

For years, Kimmel has ended his show by apologizing to Damon for running out of time to have him on. It's become a long-time running joke punctuated by skits and bits that consist of Damon trying to find his way on the show.

The celeb faux feud hit new heights throughout Kimmel's post-Oscar show, with Damon trying to photobomb an interview by Kimmel sidekick Guillermo, and then later sneaking on the set in Ben Affleck's overcoat.

And, of course, the show ended with a forlorn Damon on the steps outside on Hollywood Boulevard, once again shut out.

"I would like to apologize to you sincerely for inadvertently allowing that loser Matt Damon to soil our show," Kimmel said. "It will never happen again, I swear."

Ben Affleck appeared on the show to not only help settle the ongoing feud, the award-winning actor talked about his upcoming film, "Batman V Superman."

For years, nobody's ever figured out Superman's secret identity. Put a pair of thick glasses on a guy and suddenly, it's like he's a whole other person.

The disguise may have fooled Lex Luthor, but not Jimmy Kimmel.

In his post-Oscars show, the late-night host showed a "clip" from the upcoming "Batman vs. Superman" film featuring him interrupting a conversation between Clark Kent (Henry Cavill) and Bruce Wayne (Ben Affleck).

Of course it doesn't take him long to figure out he's talking to Superman and Batman.

Suddenly, selfies are being snapped and he's blabbing to anyone who will listen, including Luthor himself, Jesse Eisenberg.

"What do they call it when there's a celebrity that your wife would have sex with?" he asks Cavill. "You're that guy."

The show could not have ended without a Trump spoof on Oscars Sunday.

Nathan Lane and Matthew Broderick reprised their roles in "The Producers" - as the schemers behind what was supposed to be the worst musical in history - to dream up a new disaster: Trump the candidate.

That was the premise behind Jimmy Kimmel's "Producers" takeoff on his post-Oscars show.

The two schemers were looking to invent a candidate who could help them raise vast sums of money, and then say truly outrageous things that would force him out of the race and let them keep the cash.

Of course, it turned out the truly outrageous things made him even more popular.

As the segment's voiceover warns: "Just in time for the election, it's a story that starts off funny, then gets really, really depressing."