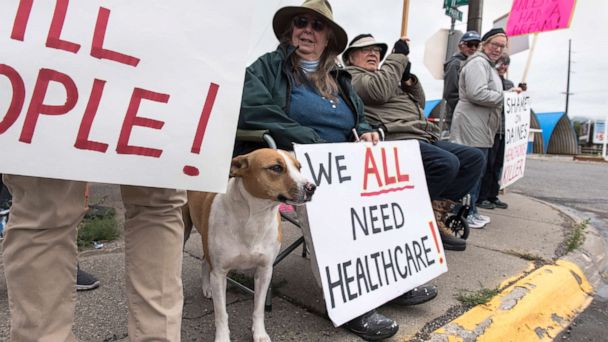 The U.S. Department of Justice said it supports a federal judge's ruling that the entire Affordable Care Act should be overturned, signaling a major shift in the Trump administration's stance on the Obama-era federal health care law as the president declared "the Republican party will soon be known as the party of health care."

"The Department of Justice has determined that the district court's judgment should be affirmed," three department lawyers wrote in a letter submitted Monday to the U.S. Court of Appeals for the Fifth Circuit, which is now considering the case. "Because the United States is not urging that any portion of the district court's judgment be reversed, the government intends to file a brief on the appellees' schedule."

Arriving to meet behind closed doors with Senate Republicans, ABC News' Mary Bruce asked President Trump to share his message for Americans who may be worried about their health care.

"The Republican party will soon be known as the party of health care," Trump predicted. "You watch."

Democrats are decrying the move, lamenting that with the Mueller investigation a fading memory, the GOP wasted no time in returning the thrust of their legislative power towards undermining healthcare.

"Once again, the Republicans have shown their true colors. They simply cannot help themselves," House Democratic Caucus Chairman Hakeem Jeffries, D-N.Y., told reporters at a news conference in the Capitol on Tuesday. "The Republicans want to take away health care from tens of millions of Americans again."

Jeffries called healthcare "a defining issue" of the 2018 midterm elections, boasting that Democrats "embraced this fight because House Democrats were given the majority in order to defend health care on behalf of everyday Americans."

When asked for comment on the legal filing, Justice Department spokeswoman Kerri Kupec told ABC News, "The Department of Justice has determined that the district court's comprehensive opinion came to the correct conclusion and will support it on appeal."

House Speaker Nancy Pelosi accused the Trump administration of "broadening its monstrous ambitions from destroying protections for pre-existing conditions to tearing down every last benefit and protection the Affordable Care Act provides."

"The Trump administration decided not only to try to destroy protections for Americans living with pre-existing conditions but to declare all-out war on the health care of the American people," Pelosi said in a statement Monday night. "Democrats will continue to fight relentlessly to protect people with pre-existing conditions and to deliver lower health costs and prescription drug prices for every American."

"The GOP will never stop trying to destroy the affordable health care of America's families," Pelosi, D-Calif., said. "In this House, with a Democratic majority, we're here to strengthen those protections and to lower healthcare costs."


A coalition of Republican-led states filed a lawsuit in Texas last year against the federal government, arguing that Congress' decision to eliminate the Affordable Care Act's individual mandate penalty -- a fee Americans paid if they didn't enroll in some form of health insurance coverage -- should render the entire law invalid.

"Once the heart of the ACA -- the individual mandate -- is declared unconstitutional, the remainder of the ACA must also fall," according to the lawsuit.

At the time, the Justice Department argued only two provisions of the health care law should be tossed out: one that requires insurance companies to cover individuals with pre-existing conditions and another that prevents insurers from charging a higher premium due to pre-existing conditions. Then-Attorney General Jeff Sessions said the rest of the law, including Medicaid expansion, can remain in place.

In December, a Texas-based district court judge ruled that the individual mandate is in fact unconstitutional, nullifying the entire health care law. The case is now awaiting a decision by a federal appeals court in New Orleans.

The outcome of the case could translate into an abrupt and disruptive turn in the nation's health care system. Some 8.8 million people signed up for a plan on Healthcare.gov for the 2018 coverage year.

Health and Human Services Secretary Alex Azar -- who supported the lawsuit -- has insisted that the administration has a "plan B" to protect people with pre-existing conditions if the court strikes down the entire health care law, commonly known as Obamacare.

"The president has been 100 percent clear: He will not sign a repeal-and-replace package for Obamacare that does not adequately protect individuals who have preexisting conditions," Azar told ABC News in October. "There are many ways to do that, but he will not sign any package that does not protect people with pre-existing conditions."
Report a correction or typo
Related topics:
abc newsnational
Copyright © 2020 ABC News Internet Ventures.
More Videos
From CNN Newsource affiliates
TOP STORIES