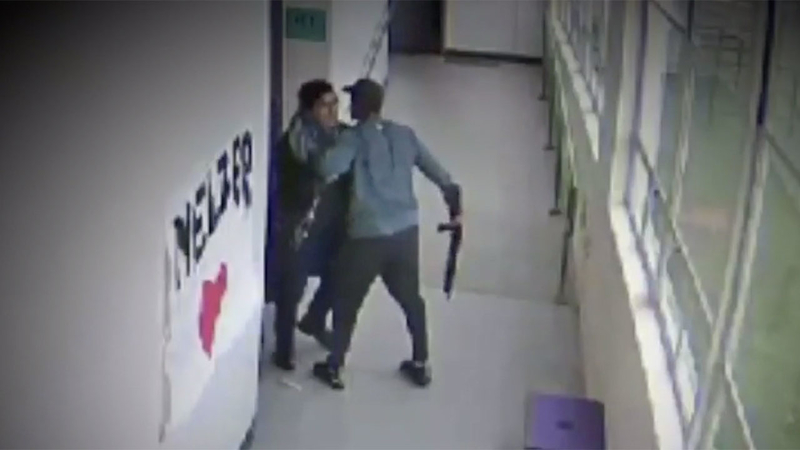 The dramatic surveillance footage obtained by ABC station KATU shows coach Keanon Lowe walking out of the classroom with one hand on the gun and the other on the student. Lowe then hands the gun off and hugs the student, Angel Granados-Diaz.

Lowe can be seen talking to Granados-Diaz as he slowly backs him away from the classroom while students run to safety. Lowe then holds Granados-Diaz in place before police come to take him into custody.

Students at Parkrose High School hailed Lowe as a hero, praising him for "putting his life in danger for us" after the scare in May of this year.

"There was no time for fear or even to think...everything happened so fast, and it was the longest fraction of a second of my life," Lowe, a former star player for the Oregon Ducks, told "Good Morning America" in May.

An attorney for Granados-Diaz told ABC News that Granados-Diaz didn't intend to hurt anybody but himself that day. Granados-Diaz has pleaded guilty to two charges related to bringing the loaded gun to school. As a part of the plea deal, he will spend three years on probation and receive mental health treatment.

A former college football standout at the University of Oregon was credited Friday with tackling an armed student at a Portland, Oregon, high school before anyone was injured.