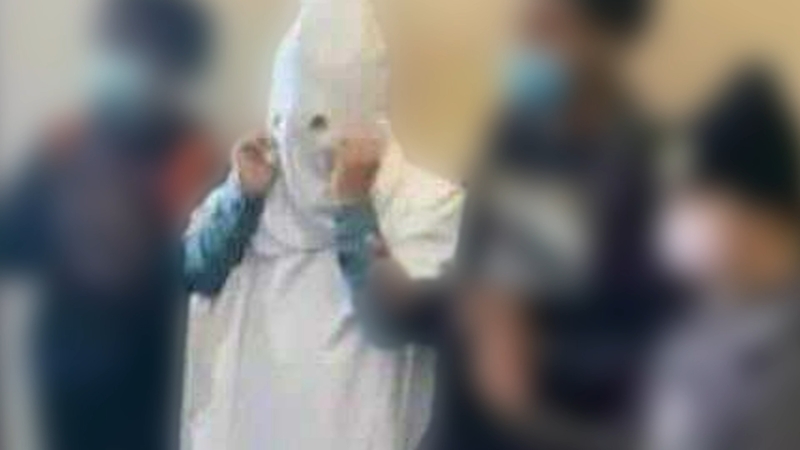 PITTSBURG, Calif. (KGO) -- A decision by a student to wear a KKK costume to Pittsburg High School has outraged many parents and students. It happened Wednesday on the same day the school held a costume contest. That student actually made it through four periods of the day before administrators took action.

RELATED: Students show up at school dressed as KKK members

According to a note sent out to parents, the Ku-Klux-Klan costume has been confiscated. Other students though, are very upset over what they witnessed at school and saw in a photo posted online.

"I was surprised, like how the principal or non of the security agents didn't stop him or anything like that," said Manuel Gutierrez who goes to Pittsburg High.

Students tell us there was a costume contest at lunch on Wednesday and that is the day the costume was worn.

Pittsburg police are investigating a racially charged incident, where a man used racial slurs and called police on a Black woman with her young daughter at a dog park, while another man coughed in the woman's face.

In a note that went out to parents Thursday, the principal says the student in the KKK costume admitted to wearing it on a "dare."

According to the principal's note, the student wore the costume through four periods without being told to take it off. It's believed he only wore the costume during certain times and not during class.

"Why would you let somebody come to school and walk around all day like that?" said Serenity Johnson who has siblings attending the school.

The note to parents says the student in the costume has been quote, "assigned consequences." He will participate in the school's restorative justice process to learn how his actions have impacted and harmed others. In that process he will help repair harm he has caused.

Some we spoke with believe stronger disciplinary measures should be taken here.
"He should be expelled! No comment, just saying, it is what it is, he shouldn't have, that's disrespectful to everybody," says Williams.

We did reach out to the superintendent and the principal to get their take on all of this but have yet to hear back.

It was brought to our attention a student wore a KKK costume to school yesterday. The costume was confiscated and we met with the students and a member of his family this morning. The student admitted to wearing the costume on a "dare." He made it through the first four periods, I believe, because he wore the costume only during certain times and not during class. The student has been assigned consequences for his actions and he will also participate in our restorative justice process to learn how his actions have impacted and harmed others. He will also work with our restorative justice ambassadors, parents, and staff to begin repairing the harm he has caused. A photo of the student in this costume was posted on social media and many students, staff, and community members are upset and concerned. As a school community, we are very disappointed and concerned with the actions of this student. We are committed to addressing what has occurred and working with this student to help him recognize the harm his actions have caused and, just as importantly, the responsibility he has, along with our school, to help repair the harm."