Students show up at school dressed as KKK members 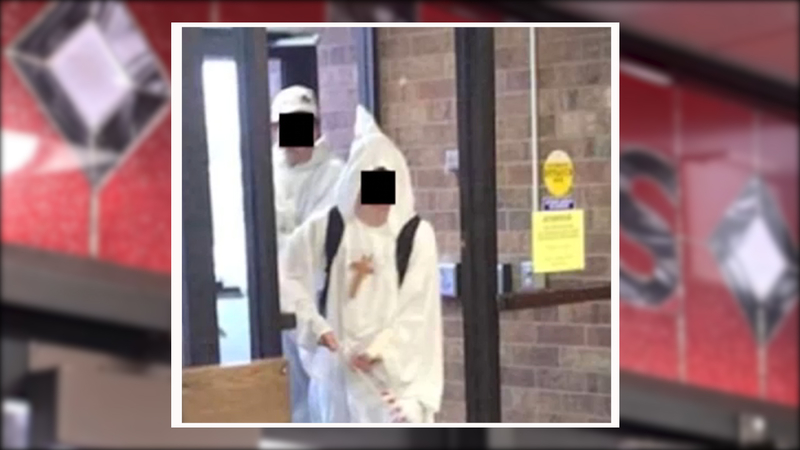 Students show up at school dressed as KKK members

A photo circulated on the internet of what appeared to be two students walking into a school wearing white robes, pointed hats and crosses. One holds an American flag.

A statement from the school's superintendent confirmed that the students in the photo attend a high school in Fremont County School District No. 25, a public school district based in Riverton, Wyoming.

"Yesterday, two students entered the school building with white robes and a white hood pulled over one of the student's faces," Terry Snyder, superintendent of the Fremont County School District No. 25 told ABC News.

"The high school administration was informed and they immediately investigated it and identified the behavior to be intentional as to their intent to represent KKK attire."

"We are aware of the photo circulating social media. We do not condone or support the student's actions," the post states. "One student's decision does not represent our school or district. We are an inclusive school that is proud of our diverse population and celebrate that fact regularly."

"We will not tolerate anything that remotely looks like a racial position being taken," Snyder said. "We live in a diverse community and celebrate diversity and when we have these kinds of actions, we have to deal with them swiftly and that's what we did."
Report a correction or typo
Related topics:
societywyomingkkkhigh schoolracism
Copyright © 2021 ABC News Internet Ventures.
TOP STORIES
Delta plus variant detected in South Bay
Police say missing runner may have suffered injury, heat stress
Sonoma Co. mandates vaccines for emergency workers
Amazon driver tracks down Vallejo man's stolen truck
A look at California's vibrant, diverse museum culture
Judge's tentative ruling says Newsom may link recall to GOP
So what's the safest mask to wear? Doctor weighs in
Show More
Demand for COVID testing 'overwhelming' in some Bay Area counties
Air quality advisory issued in Bay Area due to wildfire smoke
Guy Fieri makes surprise appearance at Sonoma Co. fair
East Bay bowling alley pushes back against indoor mask mandate
Recent COVID-19 spikes would put Alameda Co. in purple tier
More TOP STORIES News