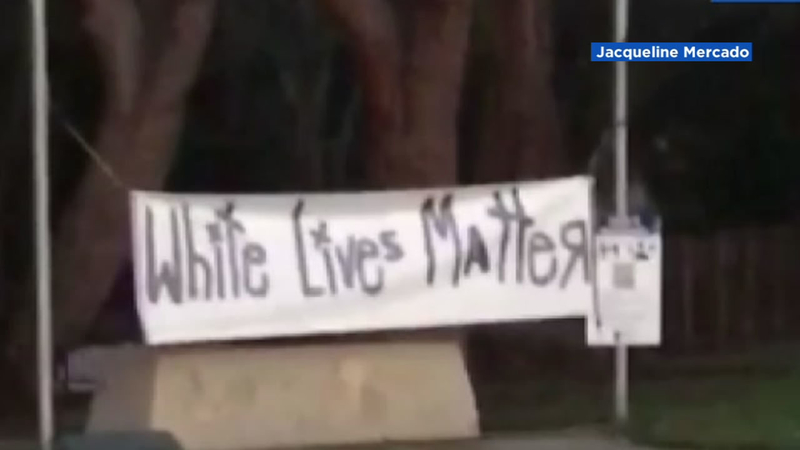 UNION CITY, Calif. (KGO) -- City officials in Union City have condemned the posting of a "White Lives Matter" banner in front of a busy intersection at a city park.

The banner was found on public property, at the corner of Smith and Dyer streets, and a police report was filed after it was taken down, officials said.

Mayor Carol Dutra-Vernaci said she was angry when she heard about it Saturday morning.

"It's certainly very insensitive because of the context," said Dutra-Vernaci, referring to the siege of the US Capitol on Jan. 6 with ties to far-right, white supremacist groups.

"I hope this is an isolated incident, as it doesn't reflect the community of my city," said Kashmir Shahi, the chair of the Union City Human Relations Commission.

He said the Human Relations Commission was holding their annual retreat Saturday morning when they heard about the sign. According to a statement from the city, before they had even heard about the sign, the commission's "first priority discussed and adopted by was to remain vigilant about the insurrection and division taking place at the national level and to prevent it from coming to Union City.

It's unclear how long it was up. A viewer sent ABC7 News video from their cellphone shot around 6:30 a.m. Saturday morning at the intersection of Dyer Street and Smith Street, in front of the Sep. 11 Flight 93 memorial.

"That's not right," said Union City resident Jalonnie Price after hearing about the banner. "That's not really appreciated, I don't understand it."

More racial tension is coming out of the East Bay City of Martinez where the words, "White Lives Matter" were painted on a roadway.

Other residents were less concerned.

"I see it's another person's opinion," said Mary Samarron. "A lot of things are being said to stir things up."

Though, she added, "I think it's simple, we treat each other with kindness."

Mayor Dutra-Vernaci agreed, though stressed this should be a learning moment for Union City, a city in which the majority of residents are non-white.

"In Union City everyone is treated equally and with respect at all times. This took away from that," she said of the banner.

She said Union City police officers were alerted to the banner Saturday morning. However, after a preliminary investigation, she said they determined no crime had been committed.

Read the city's full statement below:

"This morning a "White Lives Matter" banner was removed from the corner of Smith Street and Dyer Street. It was illegally placed on public property. The City is disgusted by this despicable act of vandalism that has occurred on the heels of the insurrection at the U.S. Capitol last week and on the weekend of the Martin Luther King, Jr. holiday that celebrates the life and achievements of this important civil rights leader. Please see a video statement from Mayor Carol Dutra-Vernaci and Human Relations Commissioner Kashmir Singh Shahi denouncing this incident.

A police report has been filed. The City Council and the Human Relations Commission, along with the UCPD and City staff, remain on heightened alert to make sure racist incidences like this do not happen again in our community.

Coincidentally, as we were made aware of this incident this morning, the Human Relations Commission was in its annual retreat discussing their priorities for the year. Unbeknownst to the Commission at the time, the first priority discussed and adopted by was to remain vigilant about the insurrection and division taking place at the national level and to prevent it from coming to Union City.

Consistent with the work of the Human Relations Commission, the City Council and the entire City organization have worked for years to celebrate our diverse community and to foster inclusivity of all residents. We became a Compassionate City in 2017 to reinforce our commitment to this.

While some may believe what happened at the United States Capitol could not happen here, this incident unfortunately shows how divisiveness at the national level can permeate even our community. We are saddened, but this incident makes us want to work harder at promoting and reinforcing our community value of unity through diversity."
Report a correction or typo
Related topics:
union cityracismrace in america
Copyright © 2021 KGO-TV. All Rights Reserved.
TOP STORIES
1 dead, 5 injured in shooting at Lake Merritt, police say
Bay Area celebrates Juneteenth as national holiday for 1st time
Power restored to over 50K customers in East Bay, PG&E says
Residents describe terrifying escape from SF apartment fire
2 killed in early morning shootings in SF
CA launches electronic vaccine verification
New online vaccine record not working? Here's how to fix it
Show More
Biden family dog Champ dies
Prominent activists, allies consider what 'Black Freedom' looks like
Newsom assaulted by 'aggressive' man on CA street
Buyers lining up to check out 'house from hell' listed for nearly $600K
How Santa Clara Co. became 1st in state to recognize Juneteenth
More TOP STORIES News