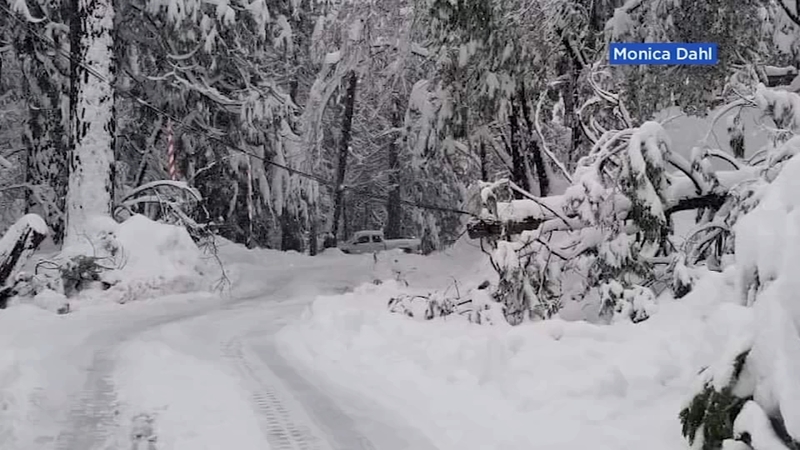 LAKE TAHOE, Calif. (KGO) -- Governor Newsom activated the state operations center Monday because of the record-breaking snow that is still having major impacts in the Sierra Wednesday.

For those still in places like South Lake Tahoe, concerns have now turned to short fuel and food supply at local businesses.

The city manager there has activated the emergency operations center to help manage the impacts from the storm and traffic.

Many people who visited the city for the Christmas holiday are finally home after spending more than 12 hours in traffic.

"It was probably the most terrifying experience that I've ever dealt with," said Emily Kelbatyrov, who is finally back home in Sacramento after more than 18 hours in the car.

ABC7 first spoke with Kelbatyrov in her car Tuesday as her family was heading back from a Tahoe vacation.

"A lot of cars were slipping into snowbanks, she said, "We ended up losing control of our car and almost crashed into two other people coming the opposite way."

Juan Orozco from Monterey County is also back home after he and his family had a 14-hour commute home from Lake Tahoe.

Snow has caused major traffic delays for those trying to leave Tahoe, so much so, that a Bay Area man drove the long way home - nearly 1,000 miles.

Getting back on the road though was nearly impossible for Orozco's family, who had a rented home in Tahoe for the holidays because snow blocked their driveway. By Saturday, the family was desperate to leave.

Without a way to get into town, they had to rely on strangers.

"We just ended up going to our neighbors," he said. "We actually bought some food from them."

Even if Orozco and his family had been able to get into town, they would have found scarce supplies because of the traffic issues delivery trucks faced.

"We're also closely monitoring what resources our grocery stores have and our gas stations," said Joe Irvin, South Lake Tahoe City Manager, "We have been in contact with California Highway Patrol and asked that they help escort those trucks into town over Echo Summit as quick as they can."

Though major highways have reopened, Caltrans officials still recommend that only people driving for essential purposes, like delivery truck drivers, make their way to the Sierra.

"We're encouraging people not to make a run for it," said Toks Omishakin, Caltrans director, "It's just not ideal and it's not safe."

The unprecedented snow is also impacting other parts of California, like in Twain Harte.

Castro Valley resident Monica Dahl has a home there and tells ABC7 that there's water rationing and many neighbors who don't have generators are without power.

"We have neighbors who have been here for decades and they said this (snow) is the most they've seen ever," Dahl said.

Back in Lake Tahoe, City Manager Joe Irvin says that the local community will get through the challenges.

"We are definitely a resilient community," Irvin said, "Wildfires, snow storms, power outages: you name it, we deal with it."