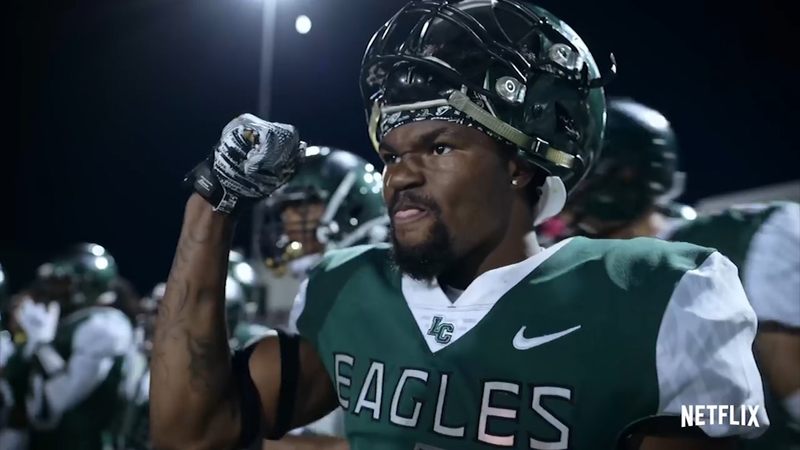 OAKLAND, Calif. (KGO) -- Looking for something new to binge watch while at home? How about something with some Bay Area flair.

Could you imagine what would it be like if you had a camera crew of 40 people following your every move while you were trying to do your job?

"Ah man it was crazy," former Laney College offensive lineman Nu'u Taugavau said. "I never thought that I would see myself on a big screen like that."

The Laney College Eagles were the latest team highlighted on the Netflix series "Last Chance U".

The show follows entire seasons of junior college football programs across the country.

This time it brought to light everything that the legendary Coach John Beam does for his Oakland-based football team.

"Overall, the experience of it was unbelievable," Coach Beam said. "I think they did tell the story of Oakland, Laney, Skyline, myself and our whole community in a really good way. But, what I hope it brings, really, is some ideals in the community and the CCCAA level that we need to support our students better."

Lineman Nu'u Taugavau had to balance football and being a dad.

Receiver Dior Scott lived in his car due to strained family relationships just to continue to play the game he loves.

These are just some of the realities still happening today for some athletes.

RELATED: How college football teams are prepping for the start of practice during the coronavirus pandemic

"I was scared to put out my story," Scott said. "Then, as the season went along, me telling my story just became natural. It felt like I was talking to a therapist or even a friend. A ton of people have been reaching out to me, telling their story and telling me their support. Hearing their stories makes it really interesting how we can really understand each other with how we feel. I think that was pretty amazing."

"I'm really happy that we got our story out there, me and my wife's story," Taugavau said. "It can show that nothing can stop us. You know what I mean? Anything we go through, we're going to fight through it."

The popular Netflix series always gets the attention of some high-profile former players and coaches.

Oakland native Damian Lillard and his brother, Houston, a Laney grad, spoke with Coach Beam about the show following the premiere.

Laney College Alumni and NFL veterans Sterling Moore and CJ Anderson even took to Twitter to share their thoughts on the series.

You for sure have gotten softer with age! 🤦🏽‍♂️😂😂 https://t.co/TjFGddRzq8

Junior College football is often overlooked, much like the city of Oakland. But "Last Chance U" showed viewers the true story of both in a whole new way.

"I hope people really understand what has been happening and what the real struggles are of Cali JuCo football and what's going on," Scott said.

"They see the grind that young men are willing to go through to pursue a dream," Coach Beam said. "They see a city like Oakland and I think our team matches the city."

"The bay is my home, I've been here all my life and I think we did it justice in the show," Taugavau said.