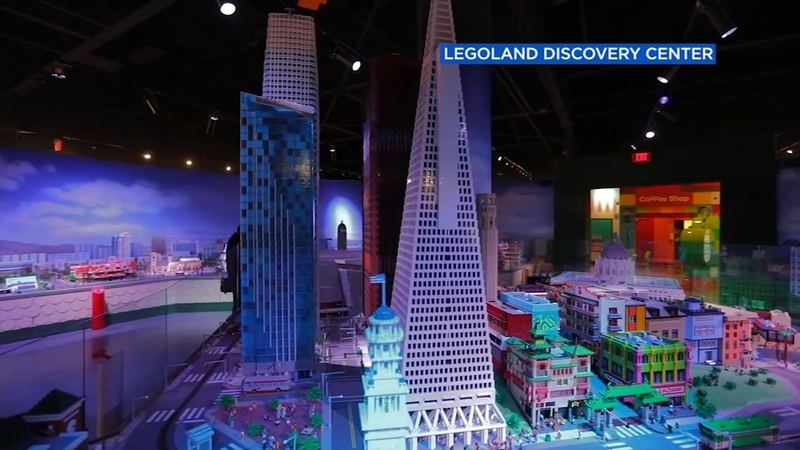 MILPITAS, Calif. (KGO) -- The first Legoland Discovery Center will make it's much anticipated debut Tuesday in Milpitas at the Great Mall.

Imagine some of the beautiful sites of the Bay Area: the Golden Gate Bridge, Levi's Stadium, Apple Park. Now make it tiny.

This is just a taste of what guests can expect at the Bay Area's first Legoland Discovery Center.

"There really isn't anything in this area that kind of caters to the 3-12 demographic," Legoland Discovery Center general manager James Judy said. "We are the ultimate indoor LEGO playground with pretty much anything and everything LEGO."

Originally set to open at the beginning of the pandemic, the 31,000 square foot interactive, educational space was delayed, but they continued to build towards their opening, brick by brick.

Guests can enjoy more than a dozen attractions that include interactive rides and movies, lessons from a LEGO Master Builder, that our own Amanda Del Castillo helped crown, and, the center piece, a Bay Area themed mini-land.

"If you ever wondered what a million and a half LEGO brick looked like, you're going to want to come out and see this," Judy said. "I think it took 45 builders several thousand hours to put this together and it's just a marvelous, amazing accomplishment."

A debut worth waiting for.

"We've had some sneak peek events leading up to tomorrow's opening and the response from the kids and families has just been phenomenal," Judy said. "It's kind of sad to see kids crying as their parents are trying to take them home when they don't want to go home at night, but it's also great that they love it that much that they don't want to leave."