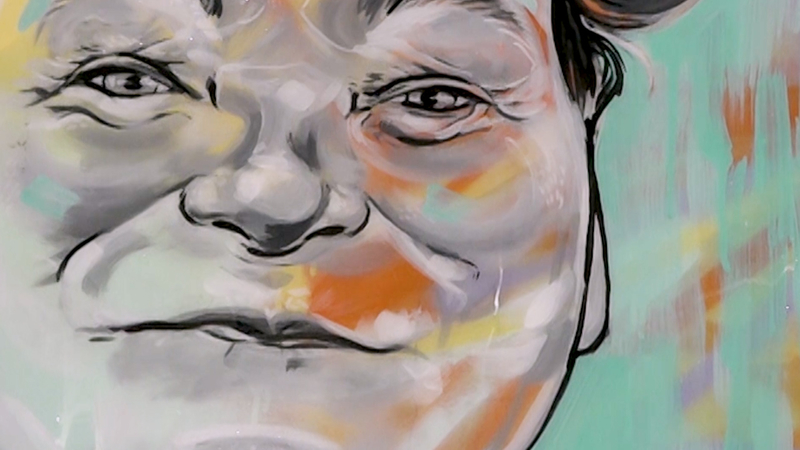 How a painting of a homeless woman sparked a movement

LIVERMORE, Calif. (KGO) -- Every day, on his way to work, Livermore artist Trent Thompson would cross paths with Syndey, a homeless woman sitting on the sidewalk.

He would greet her with a pleasant hello outside The Switch, a collaborative work space in Downtown Livermore -- until one day, he experienced something that would forever change his perspective.

"I think I came here at 1 or 2 in the morning to pick something up and she is still out there on the sidewalk and I thought that was crazy," said Thompson. "I then decided that I wanted to do something about it. Not that I can change her life in any massive way but I think that just telling her story and just making her feel seen. It was really important to me."

Thompson decided he wanted to grab the attention of the community and raise money for Syndey and local community organizations.

"I decided that I wanted to paint her. I want to make people feel seen," said Thompson. "It is the people that you walk by and you necessarily don't stop to think about what their story is and I just want to highlight that regardless of who they are."

After Thompson posted the portrait on social media, he caught the eyes and attention of many people.

"The people that saw it recognized her because she is a staple of a lot of peoples' mornings around here," said Thompson. "I think that it is just telling the story of people who don't always get their story told and I think that itself is very valuable as a reminder that every person you walk by has a story just as important as yours."

After the painting was complete and Thompson received plenty of positive feedback, he decided to start a campaign called "Pictures 4 People."

Each painting highlights a person whose story isn't often told. The painting is then placed in an auction and the proceeds go to a community organization who is trying to help those in need.

"Well first thing I thought was my appreciation for how he saw her and how he brought that to life," said Brandon Cardwell, executive director of The Switch. "It was very clear that if other people have a chance to see his interpretation of her and not just her circumstance but as a person.... if we can do that for more people in the community, then maybe we can rally folks around the individuals themselves and not just the state of their need."

Thompson's favorite part was showing Syndey her portrait for the first time.

"I think the most rewarding things is going back and showing the painting to the people. And just showing that someone took the time to do that for them is a hugely humanizing and special moment for them," said Thompson. "Syndey doesn't really say much in general but just said a thousand words with a big smile which you don't always get from her."

Thompson said that Sydney feels like a local celebrity since she saw her picture in the local newspaper.

"Oh gosh, I like it," said Syndey. It looks good. He (Thompson) has always been very nice."

Thompson had Syndey sign a hundred copies of the portrait to help raise more money.

"It's been an adjustment for her since she is famous now that people know her," said Thompson. "I think that it has been a really exciting experience for her."

Trent will continue his movement "Pictures 4 People" and is searching for other artists to help out. The group is also looking for local nonprofit sponsors who would like to get involved.

You can apply at: Pictures 4 People or OnlyUpTeam.com