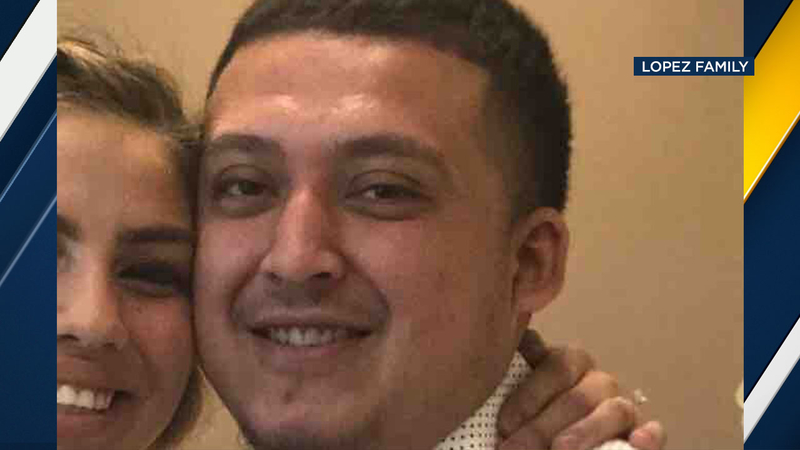 Man killed by boulder dropped from overpass onto 134 Fwy

PASADENA, Calif. -- A 23-year-old man was killed when a boulder crashed through the windshield of the car he was riding in with his family in Pasadena Tuesday, and authorities are seeking a suspect who may have intentionally dropped it.

According to the California Highway Patrol, 21-year-old Guadalupe Gutierrez and her husband, Christopher Lopez, 23, were in their Toyota Corolla on the 134 Freeway and were passing under Orange Grove Boulevard in the westbound carpool lane when the 35-pound boulder hurtled through the car's front windshield.

RELATED: Shopping cart, frozen turkey - a look at items thrown from above that killed motorists, pedestrians

Lopez, who was in the passenger seat, was struck by the large rock.

Gutierrez's mother and the couple's 4-year-old daughter were also in the car, a CHP spokesman said.

Gutierrez immediately drove her injured husband to a local hospital, but he was pronounced dead after their arrival.

CHP officials believe the boulder was intentionally thrown from the overpass and are urging anyone who may have seen suspicious activity in the area to contact authorities.

"This was an intentional act," CHP Lt. Chuck Geletko said at a Thursday afternoon press conference. "Even though the person or persons who threw the boulder may not have known who was inside the vehicle at the time, any prudent person would know that a boulder that size would seriously harm someone driving on the freeway below."

RELATED: Driver sometimes blames himself after rock thrown at van kills his friend

In a sad twist, Gutierrez said the couple had recently decided to have a second child and just two weeks ago discovered she was pregnant.

"We were so excited, my daughter was so excited to be a big sister, and out of nowhere, now he's gone," she said.

The public is asked to contact the California Highway Patrol, Altadena Area office with any information at (626) 296-8100.

"This was an innocent family driving home. Because of a careless person or persons, their lives will forever be changed," Geletko said. "We need help from the public to find the person who committed this atrocious act and prevent this from happening to another family."