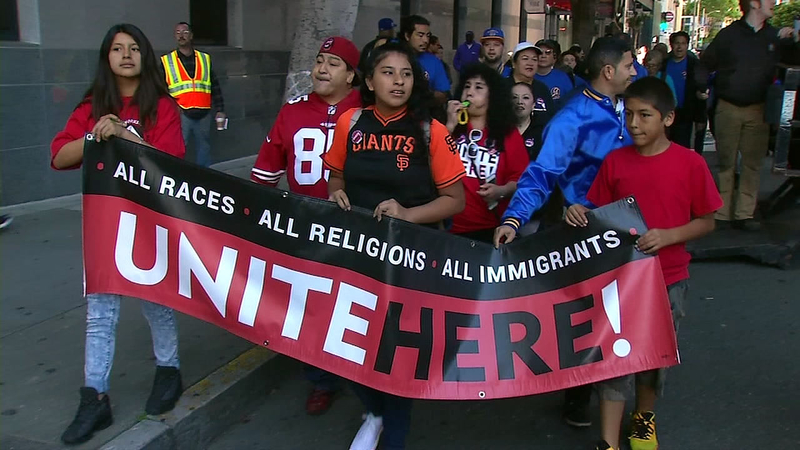 SAN FRANCISCO (KGO) -- People in the Bay Area and across the U.S. are taking part in rallies and marches Monday for the annual May Day observance.

In San Francisco, a crowd gathered at Justin Herman Plaza Monday morning. This year's May 1 demands are going well over workers rights. Protests in the Bay Area and the nation are set to spotlight everything, including the environment, police conduct and especially immigration.

A large group marched through San Francisco to City Hall in honor of May Day. Here's a look at the crowd from Sky7.

Organizers do expect the crowd to grow, but they are pleased with the turnout, so far.

Protesters took a stance in front of the U.S. Immigration and Customs enforcement office or ICE building.

The demonstrators said they want to denounce President Trump's anti-immigration policies. Some chanted: "No ban, no raids, no wall, sanctuary for all."

RELATED: Bay Area groups plan to protest on May Day

Protesters said it is upsetting to see people forced from their home countries because of violence, just to be treated unfairly here. "And when they come here, they're being criminalized and they're being put in situations that force people to have to hide, to have to be clandestine here in this country and that is not OK," protester Kati Barahona-Lopez said.

Some protesters blocked the garage entrance of the building. They also blocked off Sansome Street between Jackson and Washington during the morning commute.
So far, no arrests have been made in San Francisco.

The crowd is expected to be at Just Herman Plaza listening to speakers until noon and then march down Market Street to Civic Center Plaza where a stage is set up for speakers.

May Day rallies will also be taking place in Oakland, U.C. Berkeley, and San Jose.

Officials report at least four people have been arrested in Oakland.

Protestors started getting ready over the weekend, making signs and banners that will be on display on both sides of the Bay with marches in San Francisco and Oakland. Planners promise the rallies will be family friendly. They'll have workers in the crowd watching for crowd control and to keep the message positive.