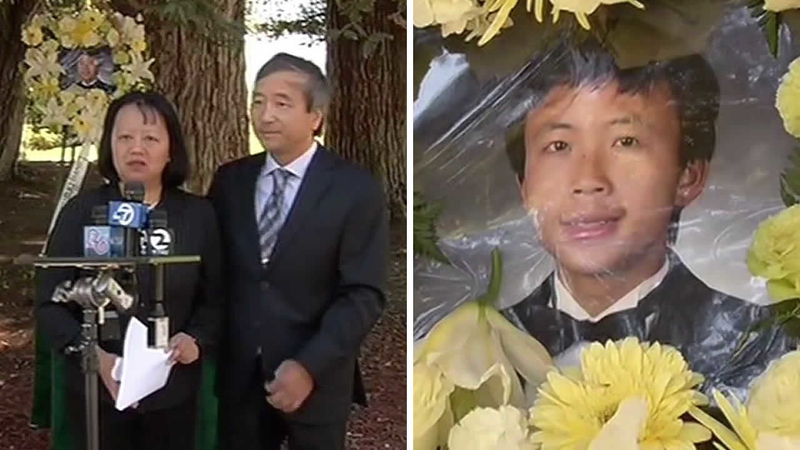 LOS ALTOS, Calif. (KGO) -- On Thursday, friends and family said goodbye to one of six people killed in a deadly rampage in Santa Barbara.

George Chen was one of the first victims 22-year-old Elliot Rodger killed on May 23. Rodger killed six people and wounded 13 others before he shot himself.

Chen was visiting his friends, David Wang of Fremont and James Hong of San Jose, in the apartment they shared with Rodger when the murder spree began.

The parents of Chen had a prepared statement which they read to the media just before the service held in Los Altos. They want police to be more vigilant, they want gun laws tightened, but perhaps more importantly, they want parents to be more vigilant of their children and more attentive to their needs, so if they drift into the dark side, they'll know about it before.

"His short life has touched a lot of hearts," Chen's mother, Kelly Wang, said. "I pray that no parents will ever experience this unbearable, unimaginable pain that we are suffering. He was only 19 and I will never have a chance to celebrate his 20th birthday, and it hurts my heart."

Wang and Junan Chen buried their son's ashes Thursday in a Buddhist service attended by family and close friends. His parents said their son was everything to them, a sweet child, bright and giving.

"He was a veteran volunteer since he was about nine years old. He worked with me to cook for the homeless, to work in the homeless center," Wang said.

She said they would now devote themselves to help prevent more senseless killings of young innocent lives.

"When we think this could happen to any other children, we just cannot sleep in the night. We just think we have to do something. It's a mission for us to do something," Wang said.

They asked other parents to address warning signs of violence in their own children -- loneliness, anger and hatred. Those are the same symptoms exhibited by the deranged killer of their son and five others.

This was their prayer. Wang said, "As a victim's family, we urge that parents will make great efforts to raise compassionate children who care about others."