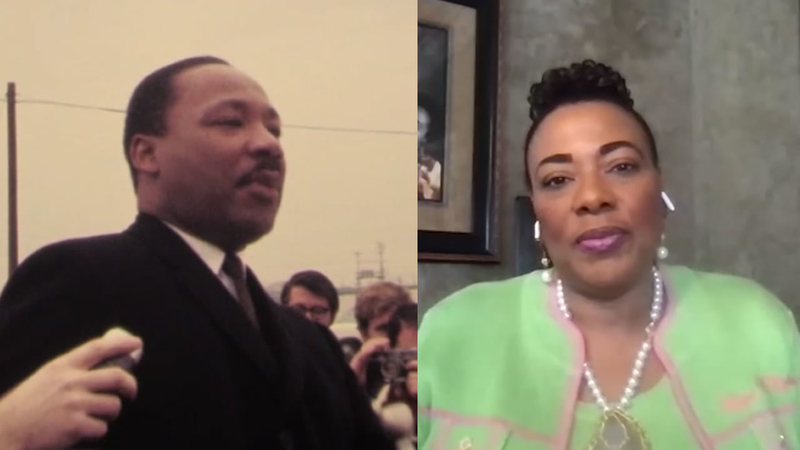 SAN FRANCISCO (KGO) -- We are remembering the life and legacy of civil rights icon Dr. Martin Luther King Jr. He would have been 92 this year, had he not been murdered in an attempt to silence a leading voice in the civil rights movement.

As the nation continues to grip with issues of social justice, Dr. King's work and his teachings are as important now as they ever were.

We spoke with Dr. Bernice A. King, MLK's daughter and CEO of the King Center for Nonviolent Social Change, on how her father's legacy should be remembered today.

"We're right in the thick of it," she said. "We have been looking in the face of the continuing systemic racism.

Dr. Bernice King is the youngest child of the late Dr. Martin Luther King Jr. She was only 5 years old when her father was assassinated in 1968.

In honor of MLK Day, Martin Luther King III joined ABC7 News to discuss his father's legacy, the current state of the country and his favorite memories.

She believes today's fight to improve the lives of marginalized people has awakened violent acts of white supremacy that led to her father's killing 53 years ago, pointing to the insurrection at the U.S. Capitol just weeks ago.

"When you see the resurgence of white supremacy at its height now in terms of insurrection and sedition and terrorist acts, it suggests to us that what has been awakened in this nation is making people nervous," she said.

Hundreds of thousands of people across the country protested in the streets in the summer 2020 to fight for changes in policy and policing in response to the police killings of George Floyd, Breonna Taylor, and countless others.

The daughter of the late civil rights icon said her father would encourage today's activist to further coordinate and collaborate in the push for change.

Please don’t act like everyone loved my father. He was assassinated. A 1967 poll reflected that he was one of the most hated men in America. Most hated. Many who quote him now and evoke him to deter justice today would likely hate, and may already hate, the authentic King. #MLK pic.twitter.com/yGdQXL5MJ3

Glover: "I saw you what tweeted this morning - 'Dear politicians/political influencers: When you tweet about my father's birthday, remember that he was resolute about eradicating racism, poverty and militarism.' Do you feel as though your father's teachings are often cherry-picked?"

King: "They are cherry-picked to peoples' convenience and comfort."

Misquoting MLK's words and weaponizing his legacy has become a popular political faux pas over the last several years from the White House briefing room the floor of the U.S. House of Representatives.

"I was listening to a commentator a few years ago who said that Dr. King has been turned into Santa Claus kind of this jovial happy person who said, 'I have a dream,'" said Eva Paterson of the Equal Justice Society. "But I was a freshman in college when he was assassinated and remember that he was not well loved. His whole history has been revised and sanitized."

Dr. King first delivered his famous "I Have a Dream" speech at a high school gymnasium in Rocky Mount on Nov. 27, 1962

Dr. King went on to say, "There are thousands of people's names, quotes, words that are very powerful that I can invoke. But I feel the need to continue to invoke my father's because if I don't invoke them, and invoke them in the right context, then people will be misled, and they will whitewash and misappropriate his word."

She reminds us although her father is revered today, MLK was one of the most disliked men in the country according to a Harris poll from the year he was killed with a 75% disapproval rating as he spoke out about the Vietnam war and economic justice.

"We tend in our popular memory to think of Dr. King as a big civil rights teddy bear, but this guy was radical," said Dr. Drew Dellinger, scholar in residence at the King Institute at Stanford University. "King is not a figure to be sentimentalized. He's not a figure, to be flattened into a cardboard cutout. This was a full spectrum thinker who had a radical critique of racism, war and poverty."

Dr. Bernice A. King continues to keep the entirety of her father's memory alive by fighting for equity and justice as the CEO of the Martin Luther King Jr. Center Center for Nonviolent Social Change

Glover: "Which of your father's teachings, his words, his messages do you think would most resonate with the people of today and the current movement."

To see the extended conversation between Dr. Bernice A. King and ABC7 News Race and Culture Reporter Julian Glover, download the ABC7 News Bay Area App on your connected device.