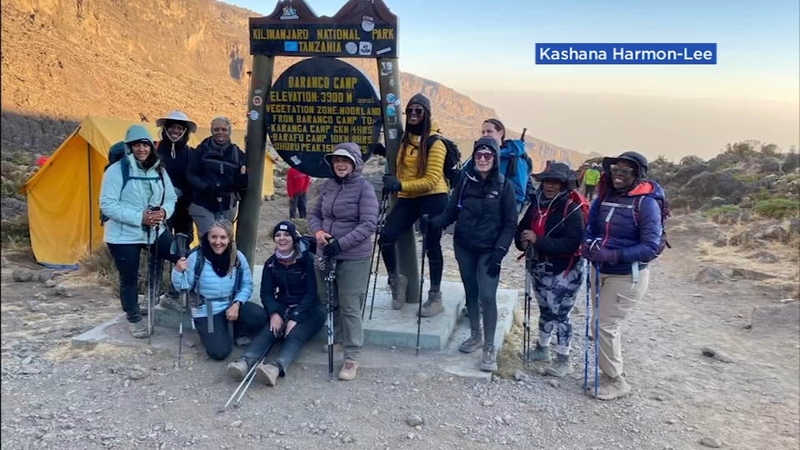 Hiking trip organizer accused of using deposits for personal use

OAKLAND, Calif. (KGO) -- A group of Bay Area women recently made a trek up Mt. Kilimanjaro in Tanzania in a show of female empowerment.

They deposited nearly $2,000 each for the trip, only to be told by the tour operator he never received that money.

It's a trip that wouldn't have happened if it wasn't for a Good Samaritan.

"We're about to start. We're a little out of breath, but we're going to make it. Slowly, polepole. Polepole," Marissa Moreno of Hayward said as she embarked on the strenuous climb up Mount Kilimanjaro, repeating the Swahili word.

The highest mountain in Africa is also the tallest freestanding mountain in the world at 19,340 feet.

"It's the challenge. You know, I'm an avid hiker. I've been hiking for 15 years and I love it," said Raygina Fox of Vacaville.

Fox and the others belong to a local hiking club. The group says organizer Stan Miles began accepting monthly installments for the trip 18 months in advance.

They accuse Miles of never paying the tour operator.

"A lot of people, like, know him and hiked with him for many years, so were very disappointed, and a big sense of betrayal," Patricia Eaton of Fairfield said.

Both Fox and Eaton are suing Miles in small claims court.

In her court filing, Eaton says Miles "did not organize the trip, did not pay the tour operator, and sent a message to group member stating that he had spent the money and did not have the money to deliver the services promised."

They say Miles sent them this group message explaining what happened.

"I thought I could invest the money since it was just sitting there and make us happy and have it back before the end of the trip. A few bad investments later, and here we are," the text read.

"I'm upset. I'm confused. I trusted him. I thought he was a friend," she said.

"He needs to know that he has to pay us back, that we're not going to just let this go and he can't just walk on with his life and start another hiking group," said Alyson Edwards of Oakland.

She also filed a lawsuit in small claims court saying the defendant used the funds he collected for the trip "for his own purposes."

7 On Your Side reached out to Miles, who did not respond to our numerous messages.

Others in the group say they have been ignored as well.

Then came a community call for help, the brainchild of Katrece Avery.

"And having to train that hard and having their dreams dashed like that, I was like, that's wrong. So again, every little bit counts, you know," she said.

That was enough to defer about a third of the cost of the trip. The travelers still had to pay another $1,200 beyond what they say they had already paid Miles.

Each of the 11 women who made the trip reached the summit.

The generosity of those who helped them get there warmed their hearts.

"You find when people are hurting or you know someone stressed or something, you find that people just come together," Fox said.

Unfortunately, 7 of the 18 people who originally paid for the trip were unable to go due to the additional costs. As for Miles, the women say he sent a direct message saying he would find a way to pay everyone back -- but has not said when or how.