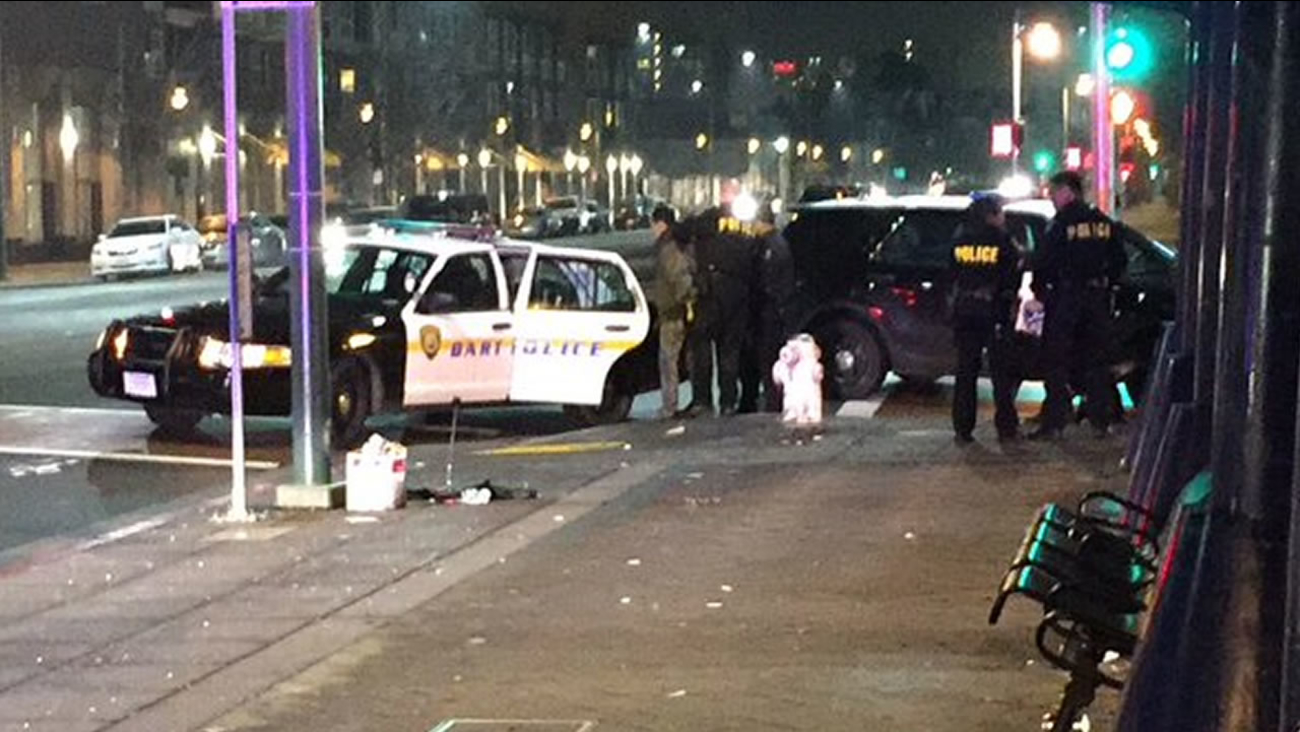 BART police are investigating a deadly shooting on a BART train at the West Oakland Station, on January 9, 2016. (KGO-TV)

OAKLAND, Calif. (KGO) -- A BART passenger was shot dead Saturday evening on a train in or near the West Oakland station, BART officials said.

BART police are investigating the shooting and searching for a suspect who fled into the West Oakland neighborhood.

BART officials are described the male suspect as slim, 6 feet 3 inches tall, black, wearing a green hooded jacket, blue jeans and red and black boxer shorts. He also had on tan military-style boots and a backpack.

BART police took a man into custody that matched that description who may be connected to the fatal shooting.

Witnesses say a passenger was killed by another rider as the San Francisco-bound BART Train pulled into the West Oakland Station. Witnesses say they noticed a disheveled looking man get on the train at either Rockridge or MacArthur station.

As the train approached West Oakland Station, just before the doors opened, the disheveled man pulled a gun and shot a younger passenger who was seated next to the door, according to witness accounts.

One witness says he helped the victim to the floor and began giving the victim CPR. He said he noticed the victim had a knife in his hands. Another witness said she also helped give aid. Other passengers fled the scene.

The West Oakland station is closed and BART is providing limited service through the Transbay Tube tonight, according to BART officials.

Trains are not stopping at the West Oakland station.

Trains traveling on the San Francisco to Pittsburg Bay Point line are running their entire route.

Trains on the other line that travels through the Transbay Tube Saturday nights, the Dublin-Pleasanton to Daly City line, is having passengers transfer at the Oakland 12th Street City Center station.

Passengers who parked their cars at the West Oakland station can take Alameda-Contra Costa Transit District buses to the station from either McArthur station or the Lake Merritt station.

#BREAKING Police may have a suspect in tonight's shooting on a train. pic.twitter.com/fIGMT06Jfl

#BREAKING Witnesses say a passenger was killed by another as the West Bound BART Train pulled into W Oakland Station pic.twitter.com/rcJdae2SZu

#BREAKING West Oakland BART is shut down for the night. Witnesses say a man shot another passenger on the Train. pic.twitter.com/Qb4A9Us5Sc

Trains are not stopping at WOAK due to police activity.

Major delay at WOAK in SF and East Bay dirs due to police activity.

Delay developing at WOAK in SF and East Bay dirs due to police activity.