A can of shaving cream found at the scene of a fireworks accident in San Bernardino, Calif. that left three children injured on Tuesday, July 4, 2017. (KABC)

SAN BERNARDINO, Calif. -- A man may face child endangerment charges after three children were seriously injured in a fireworks blast in San Bernardino on the Fourth of July.

Police responded to the 2300 block of North Cedar Street at about 8:40 p.m. Tuesday over reports of a "fireworks incident" in the area.

Three boys, ages 8, 9 and 10, were injured and hospitalized due to an explosion involving an aerosol-type can, according to San Bernardino police. Residents said they witnessed shaving cream all over the scene after the blast.

The injuries ranged from superficial injuries to some more serious, including potential loss of appendages. No injuries were life-threatening.

One of the victims, identified by his mother as Jeffrey Jones, suffered cuts and gashes on his forehead, jawline and torso area. She shared a photo with ABC7 of her son's injuries. 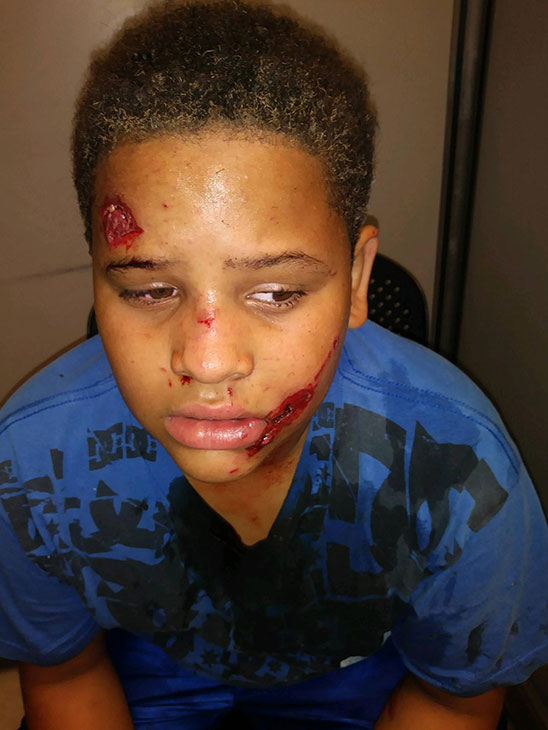 A photo of Jeffrey Jones, 10, one of three kids injured in a fireworks accident on Fourth of July at a home in San Bernardino.

"He was screaming that he was dying," said Myla Burnett, Jeffrey's mother. "I couldn't really see too much because there was so much blood all over him."

As for the other two boys, police said one may have lost a hand and some fingers in the blast. The other was complaining about not being able to see. Police said all three kids appeared to be neighbors residing on the same street.

Authorities were investigating exactly what type of device was used in the explosion.

Police questioned the stepfather of one of the young victims. He was released after questioning, but police are recommending child endangerment charges be filed by the D.A.'s office.

Meanwhile, residents were rethinking their children's safety, especially on the Fourth of July.

"I don't see him leaving my sight on the Fourth of July anymore," Burnett added. "I don't care who you're with. You try to give your children a little bit of freedom but I guess he'll be with me from now on."
Report a correction or typo
Related topics:
california4th of julychildrenchild injuredjuly fourthsouthern californiajuly 4thfireworks
Copyright © 2021 KABC-TV. All Rights Reserved.
RELATED
Young Newark man suffers horrific injuries in fireworks accident Father killed in fireworks accident in front of son
4TH OF JULY
VIDEO: Crowds block, climb on Oakland fire truck on its way to 911 call