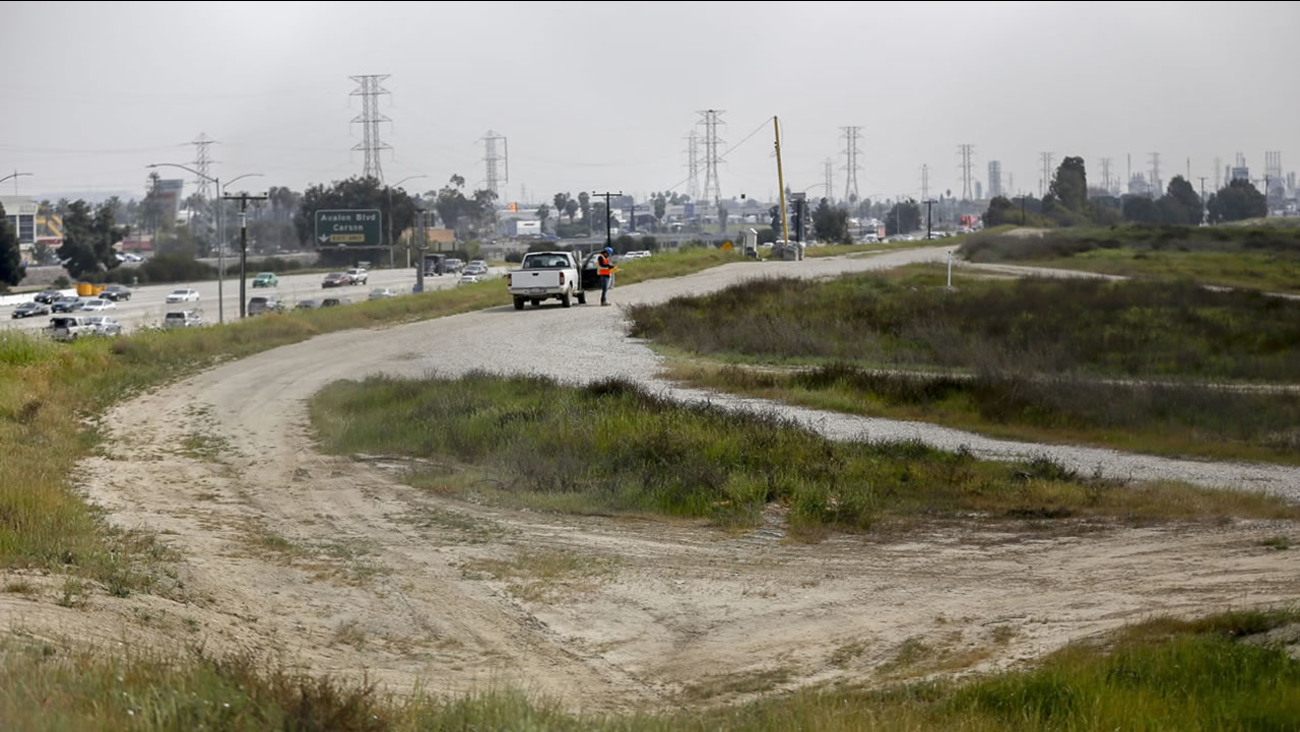 The site for a proposed NFL football stadium by the owners of the San Diego Chargers and Oakland Raiders, is seen in Carson, Calif., on Friday, Feb. 20, 2015. (AP Photo/Damian Dovarganes)

LOS ANGELES -- The San Diego Chargers and Oakland Raiders moved a step closer Tuesday to building a new stadium near Los Angeles after a complex land deal was finalized on a site that could become the home of a shared $1.7 billion venue.

The transaction involving about 170 acres in Carson, a city of 93,000 people, came a day after the teams hired former San Francisco 49ers President Carmen Policy to spearhead the next stages of their push to relocate to the nation's second-largest media market.

The pace of activity in Carson underscored an increasing divide between the Chargers and San Diego, where local officials on Monday announced a financing plan for a replacement stadium even as the team a day later moved ahead on the Carson site.

The Raiders and Chargers are planning a shared stadium if both fail to secure new stadiums in their current hometowns.

With the Carson land deal in place and the hiring of the former 49ers executive "a Carson option is even more probable than ever before," said Chicago-based sports finance consultant Marc Ganis, who has worked on relocations, financing and other projects for NFL teams, including the Rams' move to St. Louis.

The developments were part of a fierce rivalry to bring professional football back to the Los Angeles region, two decades after the departure of the Raiders and Rams.

The Carson stadium is one of two prominent proposals being considered by the NFL. St. Louis Rams owner Stan Kroenke is part of a development group planning to build a nearly $2 billion, 80,000-seat stadium in the city of Inglewood, roughly 10 miles from downtown Los Angeles.

Speaking to reporters in San Francisco, Raiders owner Mark Davis vowed to do all he can to keep his team in Oakland, even as he and Chargers owner Dean Spanos move ahead on developing the Carson site. By June 21, Davis said, he expects to know details of a possible $400 million financing plan from Oakland and Alameda County to build a new stadium in the East Bay, next to the team's current home.

Under current NFL rules, the next opportunity for a team to file to relocate would be in January 2016. Any decision to move would have to clear a tangle of league hurdles, including winning the support of at least 24 of the 32 teams.

League spokesman Brian McCarthy has said the NFL wants franchises that are strong and successful in their existing markets.

Jason Cabel Roe, an adviser to San Diego Mayor Kevin Faulconer, said city officials can only worry about what's in their power - not developments in Carson or Inglewood.

"The Chargers have consistently told us that their preference is to remain in San Diego if we can come with a viable plan," Roe said.

The Carson deal would send the deed for 157 acres of a former landfill to an entity controlled by the city. In turn, the site would be leased to a stadium authority, similar to a model used by the San Francisco 49ers for a new stadium in Santa Clara.

A separate, 11-acre parcel would remain under the control of the teams and is expected to be developed for parking.

The price of the deal was not disclosed.

The Kroenke plan envisions a stadium rising on the site of the former Hollywood Park horse track, as part of a sprawling development of homes, parks and office space.

Chargers attorney Mark Fabiani said in a statement that if, for whatever reason, the stadium is not built, Carson would retain control of the 157 acres at no cost and could develop the site for other uses.
Related topics:
sportsoaklandoakland coliseumnational footbal leaguealameda countynflbusinessoakland athleticsreal estate developmentconstructionoakland raidersreal estate
Copyright © 2020 by The Associated Press. All Rights Reserved.
RELATED