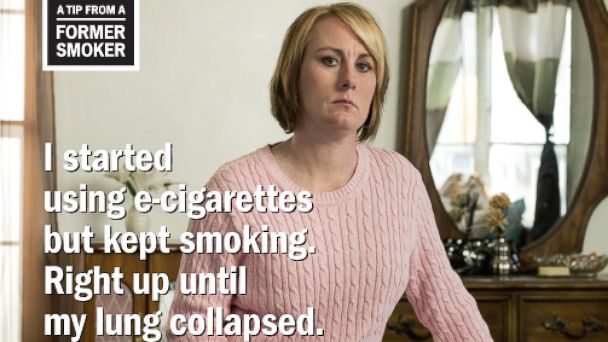 A new anti-smoking ad released by the U.S. Centers for Disease Control and Prevention will feature a lung-collapse survivor who cites both e-cigarettes and tobacco cigarettes -- but an advocate for e-cigarettes calls the ad "patently dishonest."

The ad is part of the CDC's "Tips" campaign, which has become known for using real smokers to show the grotesque effects of smoking. It marks the first time one of the ads will feature a person who cites e-cigarettes.

The print and radio ad features a 35-year-old Tennessee woman named Kristy who took up e-cigarettes to help her quit smoking regular cigarettes and to get rid of her "smoker's cough."

"I tried e-cigarettes, but I just ended up using both the electronic kind and my regular brand," she said in the ad.

After starting e-cigarettes, Kristy didn't give up smoking tobacco cigarettes and said she eventually went back to smoking regular cigarettes. Months after using e-cigarettes, she ended up in the hospital with a collapsed lung and signs of early COPD, or chronic obstructive pulmonary disorder.

At that point, according to the ad, Kristy was able to finally give up tobacco. In the ad, Kristy said she hopes her story inspires others to stop smoking before it's too late.

"I can actually breathe," she said. "I can play with my kids. When I smoked, I had no energy. It just affected my whole life."

Advocates for e-cigarettes and other vaping devices said the ad is misleading and that it mistakenly connects the tobacco products with the e-cigarette.

"It just continues the CDC's several-year quest to mislead smokers into believing that vaper products [including e-cigarettes] may be hazardous to the health of smokers," said Gregory Conley, the president of the American Vaping Association, which advocates for small- and medium-sized vaping-related companies. "The clear implication in the new CDC ad is that the use of vaper products somehow contributed to the disease suffered by the smoker in the ad. That's patently dishonest."

A CDC spokeswoman said the ad is aimed at smokers between the ages of 18 to 54 and that the ad is designed to show that mixing e-cigarettes with tobacco products is "not an effective way to safeguard your health."

"These former smokers are helping save tens of thousands of lives by sharing their powerful stories of how smoking has affected them," he said.

The U.S. Food and Drug Administration announced a proposal last year to regulate e-cigarettes that would require manufacturers to disclose product ingredients and put warning labels on devices.