ONLY ON ABC7NEWS.COM: Good samaritans dive into the Bay after car drives into water in San Leandro 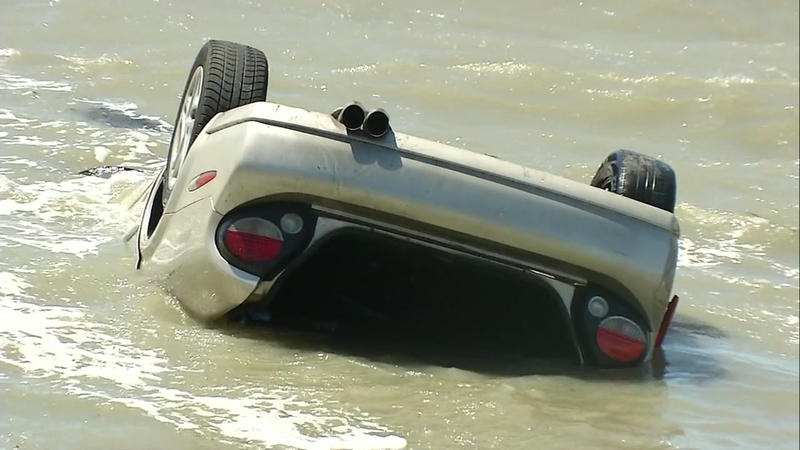 SAN LEANDRO, Calif. (KGO) -- Police say two good samaritans jumped into the water and used a rock to break a window after a car drove into the water near the marina in San Leandro Sunday afternoon.

People enjoying the day there were shocked when they witnessed the car fly into the Bay. They say the driver was going fast before he lost control. "As he went around the corner his car started fish tailing and then he hit the rocks and went airborne and flipped into the water," witness Judy Warren said.

That's when witnesses sprang into action.

"Some very concerned citizens jumped in the water, were able to free them and get them out of the vehicle," San Leandro Police Lt. Ted Henderson said. "It was a great job by those citizens. Without them being here I believe it would have been a different outcome for the occupants of that vehicle."
Henderson said the tide was coming in, meaning the water was rising when the car went in.

"That's when I just kicked off my shoes and threw my phone in the car and ran right into the water with the other gentlemen," rescuer Joseph Keppard said.

"Someone tossed me a rock and I broke the window open and I felt an arm, grabbed him and he pulled out," said Ben Sebastian, the other good samaritan.

Witnesses said the man behind the wheel was in his 20's, but no one was able to get his name. Witnesses also said he fled the scene in a truck with friends. Police are looking for him.

"They fled before we arrived, and we don't know their condition either," Henderson said.